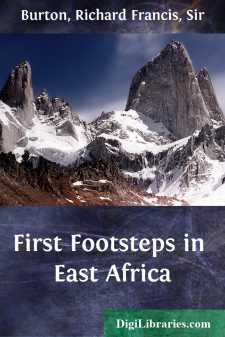 Averse to writing, as well as to reading, diffuse Prolegomena, the author finds himself compelled to relate, at some length, the circumstances which led to the subject of these pages.

In May 1849, the late Vice-Admiral Sir Charles Malcolm, formerly Superintendent of the Indian Navy, in conjunction with Mr. William John Hamilton, then President of the Royal Geographical Society of Great Britain, solicited the permission of the Court of Directors of the Honorable East India Company to ascertain the productive resources of the unknown Somali Country in East Africa. [1] The answer returned, was to the following effect:—

"If a fit and proper person volunteer to travel in the Somali Country, he goes as a private traveller, the Government giving no more protection to him than they would to an individual totally unconnected with the service. They will allow the officer who obtains permission to go, during his absence on the expedition to retain all the pay and allowances he may be enjoying when leave was granted: they will supply him with all the instruments required, afford him a passage going and returning, and pay the actual expenses of the journey."

The project lay dormant until March 1850, when Sir Charles Malcolm and Captain Smyth, President of the Royal Geographical Society of Great Britain, waited upon the chairman of the Court of Directors of the Honorable East India Company. He informed them that if they would draw up a statement of what was required, and specify how it could be carried into effect, the document should be forwarded to the Governor-General of India, with a recommendation that, should no objection arise, either from expense or other causes, a fit person should be permitted to explore the Somali Country.

Sir Charles Malcolm then offered the charge of the expedition to Dr. Carter of Bombay, an officer favourably known to the Indian world by his services on board the "Palinurus" brig whilst employed upon the maritime survey of Eastern Arabia. Dr. Carter at once acceded to the terms proposed by those from whom the project emanated; but his principal object being to compare the geology and botany of the Somali Country with the results of his Arabian travels, he volunteered to traverse only that part of Eastern Africa which lies north of a line drawn from Berberah to Ras Hafun,—in fact, the maritime mountains of the Somal. His health not permitting him to be left on shore, he required a cruizer to convey him from place to place, and to preserve his store of presents and provisions. By this means he hoped to land at the most interesting points and to penetrate here and there from sixty to eighty miles inland, across the region which he undertook to explore.

On the 17th of August, 1850, Sir Charles Malcolm wrote to Dr. Carter in these terms:—"I have communicated with the President of the Royal Geographical Society and others: the feeling is, that though much valuable information could no doubt be gained by skirting the coast (as you propose) both in geology and botany, yet that it does not fulfil the primary and great object of the London Geographical Society, which was, and still is, to have the interior explored." The Vice-Admiral, however, proceeded to say that, under the circumstances of the case, Dr....