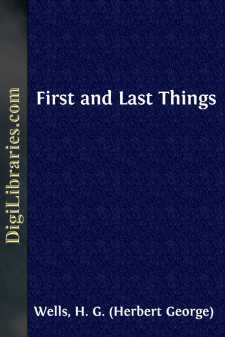 Recently I set myself to put down what I believe. I did this with no idea of making a book, but at the suggestion of a friend and to interest a number of friends with whom I was associated. We were all, we found, extremely uncertain in our outlook upon life, about our religious feelings and in our ideas of right and wrong. And yet we reckoned ourselves people of the educated class and some of us talk and lecture and write with considerable confidence. We thought it would be of very great interest to ourselves and each other if we made some sort of frank mutual confession. We arranged to hold a series of meetings in which first one and then another explained the faith, so far as he understood it, that was in him. We astonished ourselves and our hearers by the irregular and fragmentary nature of the creeds we produced, clotted at one point, inconsecutive at another, inconsistent and unconvincing to a quite unexpected degree. It would not be difficult to caricature one of those meetings; the lecturer floundering about with an air of exquisite illumination, the audience attentive with an expression of thwarted edification upon its various brows. For my own part I grew so interested in planning my lecture and in joining up point and point, that my notes soon outran the possibilities of the hour or so of meeting for which I was preparing them. The meeting got only a few fragments of what I had to say, and made what it could of them. And after that was over I let myself loose from limits of time and length altogether and have expanded these memoranda into a book.

It is as it stands now the frank confession of what one man of the early Twentieth Century has found in life and himself, a confession just as frank as the limitations of his character permit; it is his metaphysics, his religion, his moral standards, his uncertainties and the expedients with which he has met them. On every one of these departments and aspects I write—how shall I put it?—as an amateur. In every section of my subject there are men not only of far greater intellectual power and energy than I, but who have devoted their whole lives to the sustained analysis of this or that among the questions I discuss, and there is a literature so enormous in the aggregate that only a specialist scholar could hope to know it. I have not been unmindful of these professors and this literature; I have taken such opportunities as I have found, to test my propositions by them. But I feel that such apology as one makes for amateurishness in this field has a lesser quality of self-condemnation than if one were dealing with narrower, more defined and fact-laden matters. There is more excuse for one here than for the amateur maker of chemical theories, or the man who evolves a system of surgery in his leisure. These things, chemistry, surgery and so forth, we may take on the reputation of an expert, but our own fundamental beliefs, our rules of conduct, we must all make for ourselves. We may listen and read, but the views of others we cannot take on credit; we must rethink them and "make them our own." And we cannot do without fundamental beliefs, explicit or implicit. The bulk of men are obliged to be amateur philosophers,—all men indeed who are not specialized students of philosophical subjects,—even if their philosophical enterprise goes no further than prompt recognition of and submission to Authority.

And it is not only the claim of the specialist that I would repudiate. People are too apt to suppose that in order to discuss morals a man must have exceptional moral gifts. I would dispute that naive supposition. I am an ingenuous enquirer with, I think, some capacity for religious feeling, but neither a prophet nor a saint. On the whole I should be inclined to classify myself as a bad man rather than a good; not indeed as any sort of picturesque scoundrel or non-moral expert, but as a person frequently irritable, ungenerous and forgetful, and intermittently and in small but definite ways bad. One thing I claim, I have got my beliefs and theories out of my life and not fitted them to its circumstances. As often as not I have learnt good by the method of difference; by the taste of the alternative. I tell this faith I hold as I hold it and I sketch out the principles by which I am generally trying to direct my life at the present time, because it interests me to do so and I think it may interest a certain number of similarly constituted people. I am not teaching. How far I succeed or fail in that private and personal attempt to behave well, has nothing to do with the matter of this book....