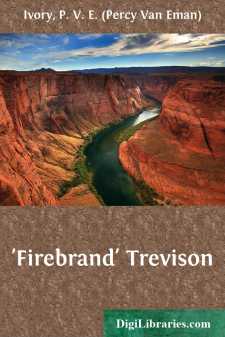 THE RIDER OF THE BLACK HORSE

The trail from the Diamond K broke around the base of a low hill dotted thickly with scraggly oak and fir, then stretched away, straight and almost level (except for a deep cut where the railroad gang and a steam shovel were eating into a hundred-foot hill) to Manti. A month before, there had been no Manti, and six months before that there had been no railroad. The railroad and the town had followed in the wake of a party of khaki-clad men that had made reasonably fast progress through the country, leaving a trail of wooden stakes and little stone monuments behind. Previously, an agent of the railroad company had bartered through, securing a right-of-way. The fruit of the efforts of these men was a dark gash on a sun-scorched level, and two lines of steel laid as straight as skilled eye and transit could make them—and Manti.

Manti could not be overlooked, for the town obtruded upon the vision from where “Brand” Trevison was jogging along the Diamond K trail astride his big black horse, Nigger. Manti dominated the landscape, not because it was big and imposing, but because it was new. Manti’s buildings were scattered—there had been no need for crowding; but from a distance—from Trevison’s distance, for instance, which was a matter of three miles or so—Manti looked insignificant, toy-like, in comparison with the vast world on whose bosom it sat. Manti seemed futile, ridiculous. But Trevison knew that the coming of the railroad marked an epoch, that the two thin, thread-like lines of steel were the tentacles of the man-made monster that had gripped the East—business reaching out for newer fields—and that Manti, futile and ridiculous as it seemed, was an outpost fortified by unlimited resource. Manti had come to stay.

And the cattle business was going, Trevison knew. The railroad company had built corrals at Manti, and Trevison knew they would be needed for several years to come. But he could foresee the day when they would be replaced by building and factory. Business was extending its lines, cattle must retreat before them. Several homesteaders had already appeared in the country, erecting fences around their claims. One of the homesteaders, when Trevison had come upon him a few days before, had impertinently inquired why Trevison did not fence the Diamond K range. Fence in five thousand acres! It had never been done in this section of the country. Trevison had permitted himself a cold grin, and had kept his answer to himself. The incident was not important, but it foreshadowed a day when a dozen like inquiries would make the building of a range fence imperative.

Trevison already felt the irritation of congestion—the presence of the homesteaders nettled him. He frowned as he rode. A year ago he would have sold out—cattle, land and buildings—at the market price. But at that time he had not known the value of his land. Now—

He kicked Nigger in the ribs and straightened in the saddle, grinning.

Five minutes later he halted the black at the crest of the big railroad cut and looked over the edge appraisingly....