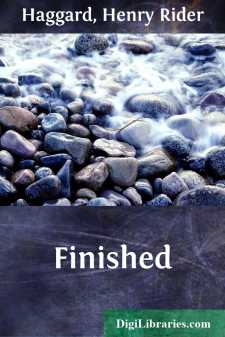 You, my friend, into whose hand, if you live, I hope these scribblings of mine will pass one day, must well remember the 12th of April of the year 1877 at Pretoria. Sir Theophilus Shepstone, or Sompseu, for I prefer to call him by his native name, having investigated the affairs of the Transvaal for a couple of months or so, had made up his mind to annex that country to the British Crown. It so happened that I, Allan Quatermain, had been on a shooting and trading expedition at the back of the Lydenburg district where there was plenty of game to be killed in those times. Hearing that great events were toward I made up my mind, curiosity being one of my weaknesses, to come round by Pretoria, which after all was not very far out of my way, instead of striking straight back to Natal. As it chanced I reached the town about eleven o'clock on this very morning of the 12th of April and, trekking to the Church Square, proceeded to outspan there, as was usual in the Seventies. The place was full of people, English and Dutch together, and I noted that the former seemed very elated and were talking excitedly, while the latter for the most part appeared to be sullen and depressed.

Presently I saw a man I knew, a tall, dark man, a very good fellow and an excellent shot, named Robinson. By the way you knew him also, for afterwards he was an officer in the Pretoria Horse at the time of the Zulu war, the corps in which you held a commission. I called to him and asked what was up.

"A good deal, Allan," he said as he shook my hand. "Indeed we shall be lucky if all isn't up, or something like it, before the day is over. Shepstone's Proclamation annexing the Transvaal is going to be read presently."

I whistled and asked,

"How will our Boer friends take it? They don't look very pleased."

"That's just what no one knows, Allan. Burgers the President is squared, they say. He is to have a pension; also he thinks it the only thing to be done. Most of the Hollanders up here don't like it, but I doubt whether they will put out their hands further than they can draw them back. The question is—what will be the line of the Boers themselves? There are a lot of them about, all armed, you see, and more outside the town."

"What do you think?"

"Can't tell you. Anything may happen. They may shoot Shepstone and his staff and the twenty-five policemen, or they may just grumble and go home. Probably they have no fixed plan."

"How about the English?"

"Oh! we are all crazy with joy, but of course there is no organization and many have no arms. Also there are only a few of us."

"Well," I answered, "I came here to look for excitement, life having been dull for me of late, and it seems that I have found it. Still I bet you those Dutchmen do nothing, except protest. They are slim and know that the shooting of an unarmed mission would bring England on their heads."

"Can't say, I am sure. They like Shepstone who understands them, and the move is so bold that it takes their breath away....