Finger plays for nursery and kindergarten 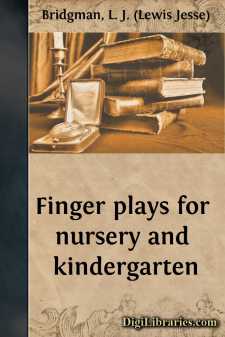 “What the child imitates,” says Froebel, “he begins to understand. Let him represent the flying of birds and he enters partially into the life of birds. Let him imitate the rapid motion of fishes in the water and his sympathy with fishes is quickened. Let him reproduce the activities of farmer, miller and baker, and his eyes open to the meaning of their work. In one word let him reflect in his play the varied aspects of life and his thought will begin to grapple with their significance.”

In all times and among all nations, finger-plays have been a delight of childhood. Countless babies have laughed and crowed over “Pat-a-cake” and other performances of the soft little hands; while children of whatever age never fail to find amusement in playing

“Here is the church,And here’s the steeple,Open the doors,And here are the people!”

and others as well known.

Yet it is not solely upon the pleasure derived from them, that finger-plays depend for their raison d’etre. By their judicious and early use, the development of strength and flexibility in the tiny lax fingers may be assisted, and dormant thought may receive its first awakening call through the motions which interpret as well as illustrate the phase of life or activity presented by the words.

The eighteen finger-plays contained in this book have already, through publication in Babyland, been introduced to their especial public, and have been much used in homes, though perhaps more in kindergartens. It will readily be seen that while some of the plays are for the babies in the nursery, others are more suitable for older children.

A baby-friend, ten months old, plays “All for Baby” throughout, pounding and clapping gleefully with all his might—while children seven or eight years of age play and sing “The Caterpillar,” “How the Corn Grew” and others with very evident enjoyment.

With a little study of the charming and expressive pictures with which the artist, Mr. L.J. Bridgman, has so sympathetically illustrated the rhymes, mothers and kindergartners have easily understood what motions were intended. To elucidate still farther, however, the playing of “The Merry Little Men” may be thus described:

During the singing of the first verse, the children look about in every direction for the “little men,” but keep the hands hidden. At the beginning of the second verse, raise both hands to full view with fingers outspread and quiet. At the words, “The first to come,” etc., let the thumbs be shown alone, then the others as named in turn, till all are again outspread as at the beginning of the second verse. In the last verse the arms are moved from side to side, hands being raised and fingers fluttering nimbly all the time. When displaying the “busy little men,” raise the hands as high as possible.

The music, composed by Miss Cornelia C. Roeske, will be found melodious and attractive and especially suited to the voices and abilities of the very young children for whom it is chiefly intended....