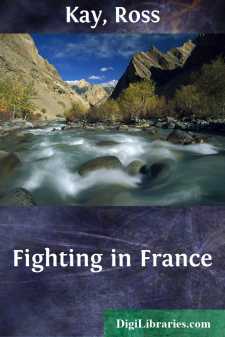 CHAPTER I A DUEL IN THE AIR

"Well, Leon, it looks as if there was going to be a fight around here pretty soon."

"Right you are, Earl. That suits me all right though and from the way the rest of the men are acting it seems to suit them too."

Earl and Leon Platt, two American boys in the army of the French Republic, were seated outside their quarters behind the fighting line. The scene was in Champagne, one of the provinces of France that already had witnessed some of the heaviest fighting of the Big War.

At the outbreak of the great European struggle these twin brothers had been traveling in Europe. Earl was in England with friends and Leon was visiting his aunt and uncle in a suburb just outside of Paris. At the earliest possible moment Leon had enlisted in the French army. Assigned to the aviation corps he had taken part in the great retreat from Belgium to the gates of the French capital. Slightly wounded at Charleroi, he had been in one of the hospitals for a few days.

When his wound had healed he had made his way south, arriving in time to take part in the battle of the Marne which rolled back the tide of German invasion and saved France. Through all these varying experiences and hardships Jacques Dineau, a young Frenchman, had been his inseparable companion. These two boys, for they were nothing more than that, had more than once distinguished themselves for bravery and daring until they had become the favorites of their regiment. Now they were stationed in Champagne, in the trenches, where for weeks and months both sides had been deadlocked, neither able to push the other back.

With the declaration of war Leon's parents had naturally been anxious as to his safety and not hearing from him had instructed Earl to find his missing brother at all hazards. This Earl had endeavored to do and after many kinds of adventures had finally been successful. The lure of further adventure however had attracted him and he too had enlisted. Now all three boys were in the same company of the same regiment.

"Yes, sir," exclaimed Jacques, who spoke English with only the slightest suspicion of an accent, "there will certainly be some real fighting soon. It will seem good after all these months of quiet."

"I shouldn't describe them as especially quiet," laughed Earl grimly.

"I mean," explained Jacques, "that we have been in the trenches all the time. Now we will have a chance to get out of them; perhaps for good."

"If we can break the German lines," suggested Leon.

"We will give them an awful bump anyway," laughed Jacques.

"And we'll lose half our men," added Leon soberly.

"We do not think of that," exclaimed Jacques proudly. "We are assigned to the front line, the post of honor. We will lead the charge and I think we are very lucky."

"The other regiments are jealous of us anyway," said Earl. "When does the attack start?"

"And we'll move into the first line trenches tonight I suppose."

"That's it," exclaimed Leon. "Pierre Garemont told me not thirty minutes ago that he had just been talking with Captain Le Blanc and that was the information he received."

"I suppose everything is arranged," said Earl....