Fighting for the Right 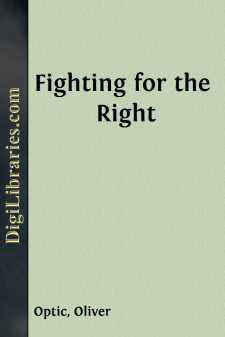 CHAPTER I A CONFERENCE AT BONNYDALE

"Well, Christy, how do you feel this morning?" asked Captain Passford, one bright morning in April, at Bonnydale on the Hudson, the residence of the former owner of the Bellevite, which he had presented to the government.

"Quite well, father; I think I never felt any better in all my life," replied Lieutenant Passford, of the United States Navy, recently commander of the little gunboat Bronx, on board of which he had been severely wounded in an action with a Confederate fort in Louisiana.

"Do you feel any soreness at the wound in your arm?" inquired the devoted parent with some anxiety.

"Not a particle, father."

"Or at the one in your thigh?"

"Not the slightest bit of soreness. In fact, I have been ready to return to my duty at any time within the last month," replied Christy very cheerfully. "It would be a shame for me to loiter around home any longer, when I am as able to plank the deck as I ever was. In truth, I think I am better and stronger than ever before, for I have had a long rest."

"Your vacation has been none too long, for you were considerably run down, the doctor said, in addition to your two wounds," added Captain Passford, senior; for the young man had held a command, and was entitled to the same honorary title as his father.

"These doctors sometimes make you think you are sicker than you really are," said Christy with a laugh.

"But your doctor did not do so, for your mother and I both thought you were rather run out by your labors in the Gulf."

"If I was, I am all right now. Do I look like a sick one? I weigh more than I ever did before in my life."

"Your mother has taken excellent care of you, and you certainly look larger and stronger than when you went to sea in the Bronx."

"But I am very tired of this inactive life. I have been assigned to the Bellevite as second lieutenant, a position I prefer to a command, for the reasons I have several times given you, father."

"I am certainly very glad to have you returned to the Bellevite, though the honors will be easier with you than they were when you were the commander of the Bronx."

"But I shall escape the responsibility of the command, and avoid being pointed at as one who commands by official influence," said Christy, rather warmly; for he felt that he had done his duty with the utmost fidelity, and it was not pleasant to have his hard-earned honors discounted by flings at his father's influence with the government.

"It is impossible to escape the sneers of the discontented, and there are always plenty of such in the navy and the army. But, Christy, you wrong yourself in taking any notice of such flings, for they have never been thrown directly at you, if at all. You are over-sensitive, and you have not correctly interpreted what your superiors have said to you," said Captain Passford seriously.

His father recalled some of the conversations between the young officer and Captain Blowitt and others, reported to him before. He insisted that the remarks of his superiors were highly complimentary to him, and that he had no right to take offence at them....