Fifty Years of Railway Life in England, Scotland and Ireland 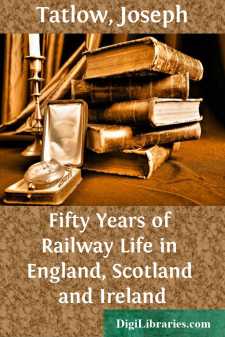 North-West Donegal.  A fine afternoon in September.  The mountain ranges were bathed in sunshine and the scarred and seamy face of stern old Errigal seemed almost to smile.  A gentle breeze stirred the air and the surface of the lakes lay shimmering in the soft autumnal light.  The blue sky, flecked with white cloudlets, the purple of the heather, the dark hues of the bogs, the varied greens of bracken, ferns and grass, the gold of ripening grain, and the grey of the mountain boulders, together formed a harmony of colour which charmed the eye and soothed the mind.

I had been travelling most of the day by railway through this delightful country, not by an express that rushed you through the scenery with breathless haste, but by an easy-going mixed train which called at every station.  Sometimes its speed reached twenty-five miles an hour, but never more, and because of numerous curves and gradients—for it was a narrow gauge and more or less a surface line—the rate of progress was much less during the greater part of the journey.

The work of the day was over.  My companion and I had dined at the Gweedore Hotel, where we were staying for the night.  With the setting sun the breeze had died away.  Perfect stillness and a silence deep, profound and all-pervading reigned.  I had been talking, as an old pensioner will talk, of byegone times, of my experiences in a long railway career, and my companion, himself a rising railway man, seemed greatly interested.  As we sauntered along, the conversation now and again lapsing into a companionable silence, he suddenly said: “Why don’t you write your reminiscences?  They would be very interesting, not only to us younger railway men, but to men of your own time too.”  Until that moment I had never seriously thought of putting my reminiscences on record, but my friend’s words fell on favourable ground, and now, less than a month since that night in Donegal, I am sitting at my desk penning these opening lines.

That my undertaking will not be an easy one I know.  My memory is well stored, but unfortunately I have never kept a diary or commonplace book of any kind.  On the contrary a love of order and neatness, carried to absurd excess, has always led me to destroy accumulated letters or documents, and much that would be useful now has in the past, from time to time, been destroyed and “cast as rubbish to the void.”

Most autobiographies, I suppose, are undertaken to please the writers.  That this is the case with me I frankly confess; but I hope that what I find much pleasure in writing my readers may, at least, find some satisfaction in reading.  Vanity, perhaps, plays some part in this hope, for, “He that is pleased with himself easily imagines that he shall please others.”

Carlyle says, “A true delineation of the smallest man, and his scene of pilgrimage through life, is capable of interesting the greatest man; that all men are to an unspeakable degree brothers, each man’s life a strange emblem of every man’s; and that human portraits, faithfully drawn, are of all pictures the welcomest on human walls.”

I am not sure that portraits of the artist by himself, though there are notable and noble instances to the contrary, are often successful.  We rarely “see oursels as ithers see us,” and are inclined to regard our virtues and our vices with equal equanimity, and to paint ourselves in too alluring colours; but I will do my best to tell my tale with strict veracity, and with all the modesty I can muster.

An autobiographer, too, exposes himself to the charge of egotism, but I must run the risk of that, endeavouring to avoid the scathing criticism of him who wrote:—

Fifty years of railway life, passed in the service of various companies, large and small, in England, Scotland and Ireland, in divers’ capacities, from junior clerk to general manager, and ultimately to the ease and dignity of director, if faithfully presented, may perhaps, in spite of all drawbacks, be not entirely devoid of interest.

I was born at Sheffield, on Good Friday, in the year 1851, and my only sister was born on a Christmas Day....