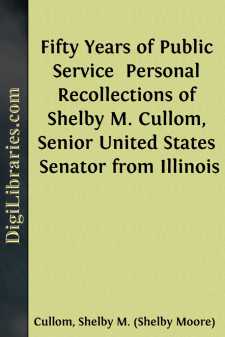 "Oh, that mine adversary had written a book!"

Such was the exclamation of one who, through the centuries, has been held up to the world as the symbol of patience and long suffering endurance, and who believed that he thus expressed the surest method of confounding an enemy.

I have come to that age in life where I feel somewhat indifferent as to consequences, and, yielding to the suggestions and insistence of friends, I determined that I would undertake to write some recollections, as they occurred to me, of the men and events of my time.

Naturally, to me the history of the period covered by my life since 1829 is particularly interesting. I do not think that I am prejudiced when I assert that while this period has not been great in Art and Letters, from a material, scientific, and industrial standpoint it has been the most wonderful epoch in all the world's history.

About the period of my birth General Andrew Jackson was first elected President of the United States. Jackson to me has always been an interesting character. Theodore Roosevelt has declared very little respect for him, and has written deprecatingly—I might say, even abusively—of him. But the truth is, there were never two Presidents in the White House who, in many respects, resembled each other more nearly than Jackson and Roosevelt.

Jackson was sixty-one years old when elected President—an unusually old man to be elected to that high office; and he had served his country during the War of the Revolution. When I consider this the thought occurs to me, How young as a Nation we are, after all. Why, I date almost back to the Revolution! President Taft jocularly remarked to me recently: "Here's my old friend, Uncle Shelby. He comes nearer connecting the present with the days of Washington than any one whom I know." And I suppose there are few men in public life whose careers extend farther into the past than mine.

During my early life the survivors of the Revolutionary War, to say nothing of the War of 1812, were very numerous and abundantly in evidence. Up to that time, no man who had not served his country in some capacity in the Revolutionary War had been elevated to the Presidency, and this was the case until the year 1843.

During the year 1829 the crown of Great Britain descended from King George IV to King William IV. That reign passed away, and I have lived to see the long reign of Victoria come and go, the reign of Edward VII come and go, and the accession of King George V. Charles X ruled in France, Francis I in Austria (the reign of Francis Joseph had not yet begun), Frederick William III in Prussia, Nicholas I in Russia; while Leo XII governed the Papal States, the Kingdom of Italy not yet having come into existence. The United Kingdom of Great Britain and Ireland had not yet a population of 24,000,000, all told.

From the dawn of this epoch may well date the practical beginning of a long cycle of political and intellectual upheaval, and the readjustment of relations which go to make up world-history, arriving at a culmination in our great Civil War....