by Lida B. (Lida Brown) McMurry 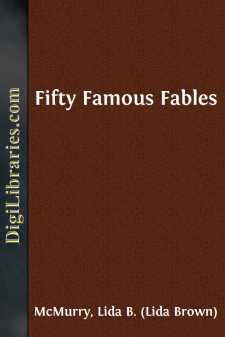 THE TORTOISE AND THE DUCKS

"Take me with you, please," called a tortoise to a gray duck and a white duck that were flying over.

The ducks heard the tortoise and flew down toward him.

"Do you really wish to go with us?" asked the ducks as they came to the ground near the tortoise.

"I surely do," replied the tortoise. "Will you please take me?"

"Why, yes, I think we can do so," said the white duck slowly.

The two ducks talked together in low tones for a few minutes. Then they flew to the woods. They soon brought back a strong twig and dropped it in front of the tortoise.

"Now," said the ducks, "if we take you off to see the world, you must promise us one thing."

"What is that?" asked the tortoise. "I will promise almost anything if you will let me go."

"You must promise not to say one word while you are in the air, NOT ONE WORD," replied the ducks.

"All right, I promise," said the tortoise. "Sometimes I do not say a word for a whole day because there is no one to listen to me."

"Well, take firm hold of the middle of the twig; we are ready to start," said the gray duck.

"If you value your life, you must hold on tightly," said the white duck.

Then they flew up! up! up! while the tortoise swung from the middle of the twig. How he enjoyed it! He had never had such a ride.

They had gone a long way safely when they came to a hayfield. The haymakers looked up and saw the ducks and the tortoise.

"Ho! ho! the tortoise has stolen some wings," called one of the haymakers.

"What a queer carriage he has!" laughed another in a loud voice.

"I pity his horses," said another.

This made the tortoise so angry that he cried out, "You—" but no one knows what he was going to say, for he fell to the ground and was killed.

[Footnote: Adapted from The Tortoise and the Geese, in a book of the same name published by Houghton, Mifflin Co.]

THE MOUSE AND THE FROG

A frog, while out walking one day, saw a mouse coming toward him.

"There is that foolish mouse," said he. "I will play a good joke on him," and he grinned as he thought how much fun he would have.

As they met, the frog said, "Good morning, Sir Mouse; I hope I find you well to-day."

"My health is not very good, so I have taken a holiday. If you are not busy, what do you say to our spending the day together?"

"Good!" answered the mouse. "I have little to do and nothing would suit me better." So they started off together.

They had not gone far when the frog said, "Let me tie one of your front feet to one of my hind legs, so that I may not lose you."

"All right," replied the mouse. "We shall surely be fast friends then."

So the frog took a blade of grass and fastened one of the mouse's front feet to one of his hind legs. When the frog leaped, the mouse tumbled after. Then they stopped and had a big laugh; it was very funny.

They first went to an oat field, where the frog found many insects, and the mouse plenty of grain....