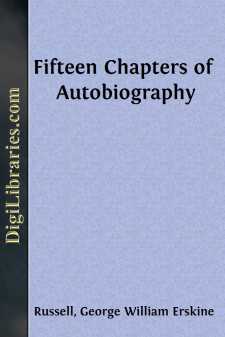 BEGINNINGS One look back—as we hurry o'er the plain, Man's years speeding us along— One look back! From the hollow past again, Youth, come flooding into song! Tell how once, in the breath of summer air, Winds blew fresher than they blow; Times long hid, with their triumph and their care, Yesterday—many years ago! E. E. Bowen.

The wayfarer who crosses Lincoln's Inn Fields perceives in the midst of them a kind of wooden temple, and passes by it unmoved. But, if his curiosity tempts him to enter it, he sees, through an aperture in the boarded floor, a slab of stone bearing this inscription:

Of the martyr thus temperately eulogized I am the great-great-great-great-grandson, and I agree with The Antiquary, that "it's a shame to the English language that we have not a less clumsy way of expressing a relationship of which we have occasion to think and speak so frequently."

Before we part company with my ill-fated ancestor, let me tell a story bearing on his historical position. When my father was a cornet in the Blues, he invited a brother-officer to spend some of his leave at Woburn Abbey. One day, when the weather was too bad for any kind of sport, the visitor was induced to have a look at the pictures. The Rembrandts, and Cuyps, and Van Dykes and Sir Joshuas bored him to extremity, but accidentally his eye lit on Hayter's famous picture of Lord Russell's trial, and, with a sudden gleam of intelligence, he exclaimed, "Hullo! What's this? It looks like a trial." My father answered, with modest pride—"It is a trial—the trial of my ancestor, William, Lord Russell." "Good heavens! my dear fellow—an ancestor of yours tried? What a shocking thing! I hope he got off."

So much for our Family Martyr.

In analysing one's nationality, it is natural to regard one's four grand-parents as one's component parts. Tried by this test, I am half an Englishman, one quarter a Highlander, and one quarter a Welshman, for my father's father was wholly English; my father's mother wholly Scotch; my mother's father wholly Welsh; and my mother's mother wholly English. My grandfather, the sixth Duke of Bedford, was born in 1766 and died in 1839. He married, as his second wife, Lady Georgiana Gordon, sister of the last Duke of Gordon, and herself "the last of the Gordons" of the senior line. She died just after I was born, and from her and the "gay Gordons" who preceded her, I derive my name of George. It has always been a comfort to me, when rebuked for ritualistic tendencies, to recall that I am great-great-nephew of that undeniable Protestant, Lord George Gordon, whose icon I daily revere. My grandmother had a numerous family, of whom my father was the third. He was born in Dublin Castle, his father being then Lord-Lieutenant of Ireland in the Ministry of "All the Talents." My grandfather had been a political and personal friend of Charles James Fox, and Fox had promised to be godfather to his next child....