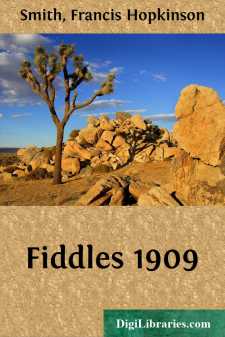 This is Marny's story, not mine. He had a hammer in his hand at the time and a tack between his teeth.

"Going to hang Fiddles right under the old fellow's head," he burst out. "That's where he belongs. I'd have given a ten-acre if he could have drawn a bead on that elk himself. Fiddles behind a .44 Winchester and that old buck browsing to windward"—and he nodded at the elk's head—"would have made the village Mayor sit up and think. What a picturesque liar you are, Fiddles"—here the point of the tack was pressed into the plaster with Marny's fat thumb—"and what a good-for-nothing, breezy, lovable vagabond"—(Bang! Bang! Hammer at play now)—"you could be when you tried. There!"

Marny stepped back and took in the stuffed head and wide-branched antlers of the magnificent elk (five feet six from skull to tips) and the small, partly faded miniature of a young man in a student cap and high-collared coat.

I waited and let him run on. It is never wise to interrupt Marny. He will lose the thread of his talk if you do, and though he starts off immediately on another lead, and one, perhaps equally graphic, he has left you suspended in mid-air so far as the tale you were getting interested in is concerned. Who Fiddles was and why his Honor the Mayor should sit up and think; why, too, the miniature of the young man—and he was young and remarkably good-looking, as I well knew, having seen the picture many times before on his mantel—should now be suspended below the elk's head, would come out in time if I loosened my ear-flaps and buttoned up my tongue, but not if I reversed the operation.

"Ah, you young fraud," he went on—the position of both head and miniature pleased him now—"do you remember the time I hauled you out from under the table when the hucksters were making a door-mat of your back; and the time I washed you off at the pump, and what you said to the gendarme, and—No, you never remembered anything. You'd rather sprawl out on the grass, or make eyes at Gretchen or the landlady—fifty, if she was a day—maybe fifty-five, and yet she fell in love" (this last was addressed directly to me; it had been reminiscent before that, fired at the ceiling, at the hangings in his sumptuous studio, or the fire crackling oil the hearth), "fell in love with that tramp—a boy of twenty-two,'mind you—Ah! but what a rounder he was! Such a trim, well-knit figure; so light and nimble on his feet; such a pair of eyes in his head, leaking tears one minute and flashing hate the next. And his mouth! I tried, but I couldn't paint it—nobody could—so I did his profile; one of those curving, seductive mouths you sometimes see on a man, that quivers when he smiles, the teeth gleaming between the moist lips."

I had lassoed a chair with my foot by this time, had dragged it nearer the fire, and had settled myself in another.

"Funny name, though for a German," I remarked carelessly—quite as if the fellow's patronymic had already formed part of the discussion.

"Had to call him something for short," Marny retorted. "Feudels-Shimmer was what they called him in Rosengarten—Wilhelm Feudels-Shimmer....