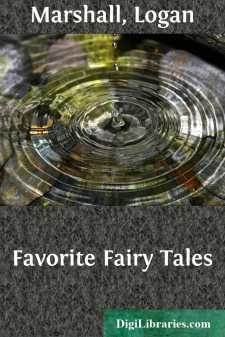 ONCE upon a time in the middle of winter, when the flakes of snow were falling like feathers from the clouds, a Queen sat at her palace window, which had an ebony black frame, stitching her husband's shirts. While she was thus engaged and looking out at the snow she pricked her finger, and three drops of blood fell upon the snow. Now the red looked so well upon the white that she thought to herself, "Oh, that I had a child as white as this snow, as red as this blood, and as black as the wood of this frame!" Soon afterwards a little daughter came to her, who was as white as snow, and with cheeks as red as blood, and with hair as black as ebony, and from this she was named "Snow-White." And at the same time her mother died.

About a year afterwards the King married another wife, who was very beautiful, but so proud and haughty that she could not bear anyone to be better-looking than herself. She owned a wonderful mirror, and when she stepped before it and said:

"Mirror, mirror on the wall,Who is the fairest of us all?"

"The Queen is the fairest of the day."

Then she was pleased, for she knew that the mirror spoke truly.

Little Snow-White, however, grew up, and became prettier and prettier, and when she was seven years old she was as fair as the noonday, and more beautiful than the Queen herself. When the Queen now asked her mirror:

"Mirror, mirror on the wall,Who is the fairest of us all?"

"The Queen was fairest yesterday;Snow-White is the fairest, now, they say."

This answer so angered the Queen that she became quite yellow with envy. From that hour, whenever she saw Snow-White, her heart was hardened against her, and she hated the little girl. Her envy and jealousy increased so that she had no rest day or night, and she said to a Huntsman, "Take the child away into the forest. I will never look upon her again. You must kill her, and bring me her heart and tongue for a token."

The Huntsman listened and took the maiden away, but when he drew out his knife to kill her, she began to cry, saying, "Ah, dear Huntsman, give me my life! I will run into the wild forest, and never come home again."

This speech softened the Hunter's heart, and her beauty so touched him that he had pity on her and said, "Well, run away then, poor child." But he thought to himself, "The wild beasts will soon devour you." Still he felt as if a stone had been lifted from his heart, because her death was not by his hand. Just at that moment a young boar came roaring along to the spot, and as soon as he clapped eyes upon it the Huntsman caught it, and, killing it, took its tongue and heart and carried them to the Queen, for a token of his deed.

But now poor little Snow-White was left motherless and alone, and overcome with grief, she was bewildered at the sight of so many trees, and knew not which way to turn. She ran till her feet refused to go farther, and as it was getting dark, and she saw a little house near, she entered in to rest. In this cottage everything was very small, but very neat and elegant. In the middle stood a little table with a white cloth over it, and seven little plates upon it, each plate having a spoon and a knife and a fork, and there were also seven little mugs. Against the wall were seven little beds arranged in a row, each covered with snow-white sheets.

Little Snow-White, being both hungry and thirsty, ate a little morsel of porridge out of each plate, and drank a drop or two of wine out of each mug, for she did not wish to take away the whole share of anyone. After that, because she was so tired, she laid herself down on one bed, but it did not suit; she tried another, but that was too long; a fourth was too short, a fifth too hard. But the seventh was just the thing; and tucking herself up in it, she went to sleep, first saying her prayers as usual....