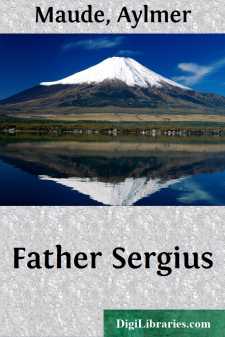 In Petersburg in the eighteen-forties a surprising event occurred. An officer of the Cuirassier Life Guards, a handsome prince who everyone predicted would become aide-de-camp to the Emperor Nicholas I. and have a brilliant career, left the service, broke off his engagement to a beautiful maid of honour, a favourite of the Empress's, gave his small estate to his sister, and retired to a monastery to become a monk.

This event appeared extraordinary and inexplicable to those who did not know his inner motives, but for Prince Stepan Kasatsky himself it all occurred so naturally that he could not imagine how he could have acted otherwise.

His father, a retired colonel of the Guards, had died when Stepan was twelve, and sorry as his mother was to part from her son, she entered him at the Military College as her deceased husband had intended.

The widow herself, with her daughter, Varvara, moved to Petersburg to be near her son and have him with her for the holidays.

The boy was distinguished both by his brilliant ability and by his immense self-esteem. He was first both in his studies—especially in mathematics, of which he was particularly fond—and also in drill and in riding. Though of more than average height, he was handsome and agile, and he would have been an altogether exemplary cadet had it not been for his quick temper. He was remarkably truthful, and was neither dissipated nor addicted to drink. The only faults that marred his conduct were fits of fury to which he was subject and during which he lost control of himself and became like a wild animal. He once nearly threw out of the window another cadet who had begun to tease him about his collection of minerals. On another occasion he came almost completely to grief by flinging a whole dish of cutlets at an officer who was acting as steward, attacking him and, it was said, striking him for having broken his word and told a barefaced lie. He would certainly have been reduced to the ranks had not the Director of the College hushed up the whole matter and dismissed the steward.

By the time he was eighteen he had finished his College course and received a commission as lieutenant in an aristocratic regiment of the Guards.

The Emperor Nicholas Pavlovich (Nicholas I) had noticed him while he was still at the College, and continued to take notice of him in the regiment, and it was on this account that people predicted for him an appointment as aide-de-camp to the Emperor. Kasatsky himself strongly desired it, not from ambition only but chiefly because since his cadet days he had been passionately devoted to Nicholas Pavlovich. The Emperor had often visited the Military College and every time Kasatsky saw that tall erect figure, with breast expanded in its military overcoat, entering with brisk step, saw the cropped side-whiskers, the moustache, the aquiline nose, and heard the sonorous voice exchanging greetings with the cadets, he was seized by the same rapture that he experienced later on when he met the woman he loved....