Faraday as a Discoverer 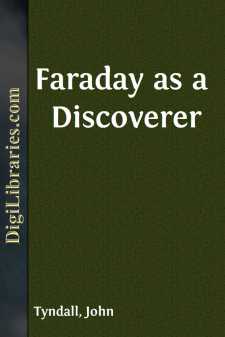 It has been thought desirable to give you and the world some image of MICHAEL FARADAY, as a scientific investigator and discoverer. The attempt to respond to this desire has been to me a labour of difficulty, if also a labour of love. For however well acquainted I may be with the researches and discoveries of that great master—however numerous the illustrations which occur to me of the loftiness of Faraday's character and the beauty of his life—still to grasp him and his researches as a whole; to seize upon the ideas which guided him, and connected them; to gain entrance into that strong and active brain, and read from it the riddle of the world—this is a work not easy of performance, and all but impossible amid the distraction of duties of another kind. That I should at one period or another speak to you regarding Faraday and his work is natural, if not inevitable; but I did not expect to be called upon to speak so soon. Still the bare suggestion that this is the fit and proper time for speech sent me immediately to my task: from it I have returned with such results as I could gather, and also with the wish that those results were more worthy than they are of the greatness of my theme.

It is not my intention to lay before you a life of Faraday in the ordinary acceptation of the term. The duty I have to perform is to give you some notion of what he has done in the world; dwelling incidentally on the spirit in which his work was executed, and introducing such personal traits as may be necessary to the completion of your picture of the philosopher, though by no means adequate to give you a complete idea of the man.

The newspapers have already informed you that Michael Faraday was born at Newington Butts, on September 22, 1791, and that he died at Hampton Court, on August 25, 1867. Believing, as I do, in the general truth of the doctrine of hereditary transmission—sharing the opinion of Mr. Carlyle, that 'a really able man never proceeded from entirely stupid parents'—I once used the privilege of my intimacy with Mr. Faraday to ask him whether his parents showed any signs of unusual ability. He could remember none. His father, I believe, was a great sufferer during the latter years of his life, and this might have masked whatever intellectual power he possessed. When thirteen years old, that is to say in 1804, Faraday was apprenticed to a bookseller and bookbinder in Blandford Street, Manchester Square: here he spent eight years of his life, after which he worked as a journeyman elsewhere.

You have also heard the account of Faraday's first contact with the Royal Institution; that he was introduced by one of the members to Sir Humphry Davy's last lectures, that he took notes of those lectures; wrote them fairly out, and sent them to Davy, entreating him at the same time to enable him to quit trade, which he detested, and to pursue science, which he loved....