Fantasia of the Unconscious 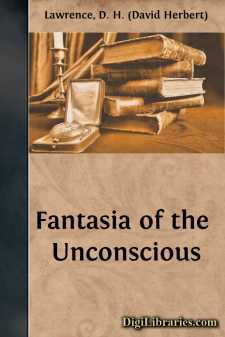 The present book is a continuation from "Psychoanalysis and the Unconscious." The generality of readers had better just leave it alone. The generality of critics likewise. I really don't want to convince anybody. It is quite in opposition to my whole nature. I don't intend my books for the generality of readers. I count it a mistake of our mistaken democracy, that every man who can read print is allowed to believe that he can read all that is printed. I count it a misfortune that serious books are exposed in the public market, like slaves exposed naked for sale. But there we are, since we live in an age of mistaken democracy, we must go through with it.

As for the limited few, in whom one must per force find an answerer, I may as well say straight off that I stick to the solar plexus. That statement alone, I hope, will thin their numbers considerably.

Finally, to the remnants of a remainder, in order to apologize for the sudden lurch into cosmology, or cosmogony, in this book, I wish to say that the whole thing hangs inevitably together. I am not a scientist. I am an amateur of amateurs. As one of my critics said, you either believe or you don't.

I am not a proper archæologist nor an anthropologist nor an ethnologist. I am no "scholar" of any sort. But I am very grateful to scholars for their sound work. I have found hints, suggestions for what I say here in all kinds of scholarly books, from the Yoga and Plato and St. John the Evangel and the early Greek philosophers like Herakleitos down to Fraser and his "Golden Bough," and even Freud and Frobenius. Even then I only remember hints—and I proceed by intuition. This leaves you quite free to dismiss the whole wordy mass of revolting nonsense, without a qualm.

Only let me say, that to my mind there is a great field of science which is as yet quite closed to us. I refer to the science which proceeds in terms of life and is established on data of living experience and of sure intuition. Call it subjective science if you like. Our objective science of modern knowledge concerns itself only with phenomena, and with phenomena as regarded in their cause-and-effect relationship. I have nothing to say against our science. It is perfect as far as it goes. But to regard it as exhausting the whole scope of human possibility in knowledge seems to me just puerile. Our science is a science of the dead world. Even biology never considers life, but only mechanistic functioning and apparatus of life.

I honestly think that the great pagan world of which Egypt and Greece were the last living terms, the great pagan world which preceded our own era once, had a vast and perhaps perfect science of its own, a science in terms of life. In our era this science crumbled into magic and charlatanry. But even wisdom crumbles.

I believe that this great science previous to ours and quite different in constitution and nature from our science once was universal, established all over the then-existing globe. I believe it was esoteric, invested in a large priesthood. Just as mathematics and mechanics and physics are defined and expounded in the same way in the universities of China or Bolivia or London or Moscow to-day, so, it seems to me, in the great world previous to ours a great science and cosmology were taught esoterically in all countries of the globe, Asia, Polynesia, America, Atlantis and Europe. Belt's suggestion of the geographical nature of this previous world seems to me most interesting. In the period which geologists call the Glacial Period, the waters of the earth must have been gathered up in a vast body on the higher places of our globe, vast worlds of ice. And the sea-beds of to-day must have been comparatively dry....