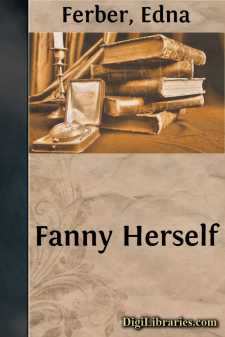 You could not have lived a week in Winnebago without being aware of Mrs. Brandeis. In a town of ten thousand, where every one was a personality, from Hen Cody, the drayman, in blue overalls (magically transformed on Sunday mornings into a suave black-broadcloth usher at the Congregational Church), to A. J. Dawes, who owned the waterworks before the city bought it. Mrs. Brandeis was a super-personality. Winnebago did not know it. Winnebago, buying its dolls, and china, and Battenberg braid and tinware and toys of Mrs. Brandeis, of Brandeis' Bazaar, realized vaguely that here was some one different.

When you entered the long, cool, narrow store on Elm Street, Mrs. Brandeis herself came forward to serve you, unless she already was busy with two customers. There were two clerks—three, if you count Aloysius, the boy—but to Mrs. Brandeis belonged the privilege of docketing you first. If you happened in during a moment of business lull, you were likely to find her reading in the left-hand corner at the front of the store, near the shelf where were ranged the dolls' heads, the pens, the pencils, and school supplies.

You saw a sturdy, well-set-up, alert woman, of the kind that looks taller than she really is; a woman with a long, straight, clever nose that indexed her character, as did everything about her, from her crisp, vigorous, abundant hair to the way she came down hard on her heels in walking. She was what might be called a very definite person. But first you remarked her eyes. Will you concede that eyes can be piercing, yet velvety? Their piercingness was a mental quality, I suppose, and the velvety softness a physical one. One could only think, somehow, of wild pansies—the brown kind. If Winnebago had taken the trouble to glance at the title of the book she laid face down on the pencil boxes as you entered, it would have learned that the book was one of Balzac's, or, perhaps, Zangwill's, or Zola's. She never could overcome that habit of snatching a chapter here and there during dull moments. She was too tired to read when night came.

There were many times when the little Wisconsin town lay broiling in the August sun, or locked in the January drifts, and the main business street was as silent as that of a deserted village. But more often she came forward to you from the rear of the store, with bits of excelsior clinging to her black sateen apron. You knew that she had been helping Aloysius as he unpacked a consignment of chamber sets or a hogshead of china or glassware, chalking each piece with the price mark as it was dug from its nest of straw and paper.

"How do you do!" she would say. "What can I do for you?" And in that moment she had you listed, indexed, and filed, were you a farmer woman in a black shawl and rusty bonnet with a faded rose bobbing grotesquely atop it, or one of the patronizing East End set who came to Brandeis' Bazaar because Mrs. Brandeis' party favors, for one thing, were of a variety that could be got nowhere else this side of Chicago....