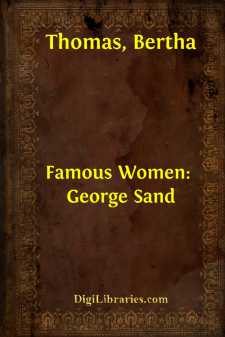 In naming George Sand we name something more exceptional than even a great genius. Her rise to eminence in the literature of her century, is, if not without a parallel, yet absolutely without a precedent, in the annals of women of modern times.

George Sand was of mixed national descent, and in her veins ran the blood of heroes and of kings. The noble and the artist, the bourgeoisie and the people, all had their representatives among their immediate ancestors. Her grandmother, the guardian of her girlhood, was the child of Maurice, Marshal Saxe, that favorite figure in history and romance, himself son of the famous Augustus II., Elector of Saxony, and King of Poland, and the Swedish Countess Aurora von Königsmark. The Marshal's daughter Aurore, though like her father of illegitimate birth—her mother, who was connected with the stage, passed by her professional name of Mlle. Verrieres—obtained after the Marshal's death the acknowledgment and protection of his relatives in high places, notably of his niece, the Dauphin of France, grand-daughter of Augustus of Poland, and mother of the three kings—Louis XVI., Louis XVIII., and Charles X.

Carefully educated at St. Cyr, Mlle. de Saxe was married, when little more than a child, to the Count de Horn, who was also of partly royal but irregular origin. He very shortly afterward fell in a duel. His widow, at thirty, became the wife of M. Dupin de Franceuil, an old gentleman of good provincial family and some fortune. Maurice, their only child, was the father of George Sand.

Madame Dupin (the suffix de Franceuil was afterwards dropped by her husband) appears to have inherited none of the adventurous and erratic tendencies of her progenitors. Aristocratic in her sympathies, philosophic in her intellect, and strictly decorous in her conduct, throughout the whole of her long and checkered life she was regarded with respect. Left a widow again, ten years after her second marriage, she concentrated her hopes and affections on her handsome and amiable son Maurice. Though fondly attached to her, he was yet to be the cause of her heaviest sorrows, by his more than hazardous marriage, and by his premature and tragical fate.

His strongest natural leanings seem to have been towards art in general, music and the drama in particular, and of his facile, buoyant, artist temperament there is ample evidence; but the political conditions of France under the Directory in 1798 left him no choice but to enter the army, where he served under Dupont, winning his commission on the field of Marengo in 1800. It was during this Italian campaign that the young officer met with the woman who, four years later, became his wife, and the mother of his illustrious child.

Mademoiselle Sophie Victorie Delaborde, was, emphatically speaking, a daughter of the people. Her father had been a poor bird-seller at Paris, where she herself had worked as a milliner....