Famous Stories Every Child Should Know 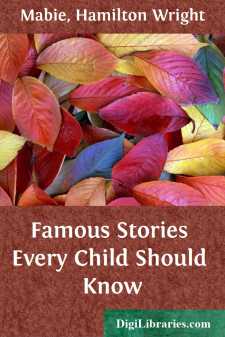 The group of stories brought together in this volume differ from legends because they have, with one exception, no core of fact at the centre, from myths because they make no attempt to personify or explain the forces or processes of nature, from fairy stories because they do not often bring on to the stage actors of a different nature from ours. They give full play to the fancy as in "A Child's Dream of a Star," "The King of the Golden River," "Undine," and "The Snow Image"; but they are not poetic records of the facts of life, attempts to shape those facts "to meet the needs of the imagination, the cravings of the heart." In the Introduction to the book of Fairy Tales in this series, those familiar and much loved stories which have been repeated to children for unnumbered generations and will be repeated to the end of time, are described as "records of the free and joyful play of the imagination, opening doors through hard conditions to the spirit, which craves power, freedom, happiness; righting wrongs, and redressing injuries; defeating base designs; rewarding patience and virtue; crowning true love with happiness; placing the powers of darkness under the control of man and making their ministers his servants." The stories which make up this volume are closer to experience and come, for the most part, nearer to the every-day happenings of life.

A generation ago, when the noble activities of science and its inspiring discoveries were taking possession of the minds of men and revealing possibilities of power of which they had not dreamed, the prediction was freely made that poetry and fiction had had their day, and that henceforth men would be educated upon facts and get their inspirations from what are called real things. So engrossing and so marvellous were the results of investigation, the achievements of experiment, that it seemed to many as if the older literature of imagination and fancy had served its purpose as completely as alchemy, astrology, or chain armour.

The prophecies of those fruitful years of research did not tell half the story of the wonderful things that were to be; the uses of electricity which are within easy reach for the most homely and practical purposes are as mysterious and magical as the dreams of the magicians. We are served by invisible ministers who are more powerful than the genii and more nimble than Puck. There has been a girdle around the world for many years; but there is good reason to believe that the time will come when news will go round the globe on waves of air. If we were not accustomed to ordering breakfast miles away from the grocer and the poulterer, we should be overcome with amazement every time we took up the telephone transmitter. Absolutely pure tones are now being made by the use of dynamos and will soon be sent into homes lying miles distant from the power house, so to speak, so that very sweet music is being played by arc lights.

The anticipations of scientific men, so far as the uses of force are concerned, have been surpassed by the wonderful discoveries and applications of the past few years; but poetry and romance are not dead; on the contrary, they are more alive in the sense of awakening a wider interest than ever before in the history of writing....