False Friends, and The Sailor's Resolve 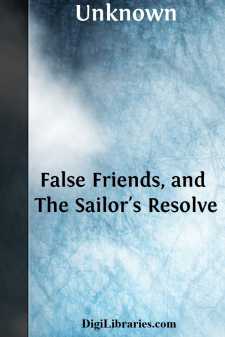 "Thorns and snares are in the way of the froward."—PROV. xxii. 5.

"Philip, your conduct has distressed me exceedingly," said Lady Grange, laying her hand on the arm of her son, as they entered together the elegant apartment which had been fitted up as her boudoir. "You could not but know my feelings towards those two men—I will not call them gentlemen—whose company you have again forced upon me. You must be aware that your father has shut the door of this house against them."

"My father has shut the door against better men than they are," said the youth carelessly; "witness my own uncles Henry and George."

The lip of the lady quivered, the indignant colour rose even to her temples; she attempted to speak, but her voice failed her, and she turned aside to hide her emotion.

"Well, mother, I did not mean to vex you," said Philip, who was rather weak in purpose than hardened in evil; "it was a shame to bring Jones and Wildrake here, but—but you see I couldn't help it." And he played uneasily with his gold-headed riding-whip, while his eye avoided meeting that of his mother.

"They have acquired some strange influence, some mysterious hold over you," answered the lady. "It cannot be," she added anxiously, "that you have broken your promise,—that they have drawn you again to the gaming-table,—that you are involved in debt to these men?"

Philip whistled an air and sauntered up to the window.

Lady Grange pressed her hand over her eyes, and a sigh, a very heavy sigh, burst from her bosom. Philip heard, and turned impatiently round.

"There's no use in making the worst of matters," said he; "what's done can't be helped; and my debts, such as they are, won't ruin a rich man like my father."

"It is not that which I fear," said the mother faintly, with a terrible consciousness that her son,—her hope, her pride, the delight of her heart,—had entered on a course which, if persevered in, must end in his ruin both of body and soul. "I tremble at the thought of the misery which you are bringing on yourself. These men are making you their victim: they are blinding your eyes; they are throwing a net around you, and you have not the resolution to break from the snare."

"They are very pleasant, jovial fellows!" cried Philip, trying to hide under an appearance of careless gaiety the real annoyance which he felt at the words of his mother.

"I've asked them to dine here to-day and—"

"I shall not appear at the table," said Lady Grange, drawing herself up with dignity; "and if your father should arrive—"

"Oh! he won't arrive to-night; he never travels so late."

"But, Philip," said the lady earnestly again laying her cold hand on his arm. She was interrupted by her wayward and undutiful son.

"Mother, there's no use in saying anything more on the subject; it only worries you, and puts me out of temper. I can't, and I won't be uncivil to my friends;" and turning hastily round, Philip quitted the apartment.

"Friends!" faintly echoed Lady Grange, as she saw the door close behind her misguided son....