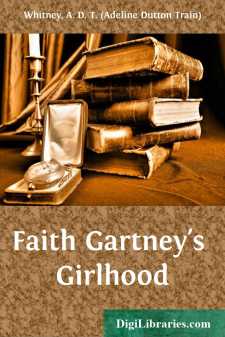 East or West, it matters not where—the story may, doubtless, indicate something of latitude and longitude as it proceeds—in the city of Mishaumok, lived Henderson Gartney, Esq., one of those American gentlemen of whom, if she were ever canonized, Martha of Bethany must be the patron saint—if again, feminine celestials, sainthood once achieved through the weary experience of earth, don't know better than to assume such charge of wayward man—born, as they are, seemingly, to the life destiny of being ever "careful and troubled about many things."

We have all of us, as little girls, read "Rosamond." Now, one of Rosamond's early worries suggests a key to half the worries, early and late, of grown men and women. The silver paper won't cover the basket.

Mr. Gartney had spent his years, from twenty-five to forty, in sedulously tugging at the corners. He had had his share of silver paper, too—only the basket was a little too big.

In a pleasant apartment, half library, half parlor, and used in the winter months as a breakfast room, beside a table still covered with the remnants of the morning meal, sat Mrs. Gartney and her young daughter, Faith; the latter with a somewhat disconcerted, not to say rueful, expression of face.

A pair of slippers on the hearth and the morning paper thrown down beside an armchair, gave hint of the recent presence of the master of the house.

"Then I suppose I can't go," remarked the young lady.

"I'm sure I don't know," answered the elder, in a helpless, worried sort of tone. "It doesn't seem really right to ask your father for the money. I did just speak of your wanting some things for a party, but I suppose he has forgotten it; and, to-day, I hate to trouble him with reminding. Must you really have new gloves and slippers, both?"

Faith held up her little foot for answer, shod with a partly worn bronze kid, reduced to morning service.

"These are the best I've got. And my gloves have been cleaned over and over, till you said yourself, last time, they would hardly do to wear again. If it were any use, I should say I must have a new dress; but I thought at least I should freshen up with the 'little fixings,' and perhaps have something left for a few natural flowers for my hair."

"I know. But your father looked annoyed when I told him we should want fresh marketing to-day. He is really pinched, just now, for ready money—and he is so discouraged about the times. He told me only last night of a man who owed him five hundred dollars, and came to say he didn't know as he could pay a cent. It doesn't seem to be a time to afford gloves and shoes and flowers. And then there'll be the carriage, too."

"Oh, dear!" sighed Faith, in the tone of one who felt herself checkmated. "I wish I knew what we really could afford! It always seems to be these little things that don't cost much, and that other girls, whose fathers are not nearly so well off, always, have, without thinking anything about it." And she glanced over the table, whereon shone a silver coffee service, and up at the mantel where stood a French clock that had been placed there a month before....