Fairy Tales Every Child Should Know 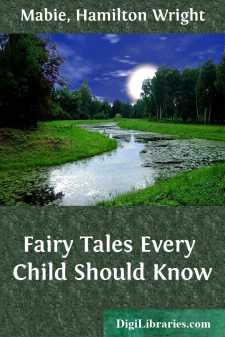 INTRODUCTION TO "FAIRIES EVERY CHILD SHOULD KNOW"

The fairy tale is a poetic recording of the facts of life, an interpretation by the imagination of its hard conditions, an effort to reconcile the spirit which loves freedom and goodness and beauty with its harsh, bare and disappointing conditions. It is, in its earliest form, a spontaneous and instinctive endeavor to shape the facts of the world to meet the needs of the imagination, the cravings of the heart. It involves a free, poetic dealing with realities in accordance with the law of mental growth; it is the naïve activity of the young imagination of the race, untrammelled by the necessity of rigid adherence to the fact.

The myths record the earliest attempt at an explanation of the world and its life; the fairy tale records the free and joyful play of the imagination, opening doors through hard conditions to the spirit, which craves power, freedom, happiness; righting wrongs and redressing injuries; defeating base designs; rewarding patience and virtue; crowning true love with happiness; placing the powers of darkness under control of man and making their ministers his servants. In the fairy story, men are not set entirely free from their limitations, but, by the aid of fairies, genii, giants and demons, they are put in command of unusual powers and make themselves masters of the forces of nature.

The oldest fairy stories constitute a fascinating introduction to the book of modern science, curiously predicting its discoveries, its uncovering of the resources of the earth and air, its growing control of the tremendous forces which work in earth and air. And it is significant that the recent progress of science is steadily toward what our ancestors would have considered fairy land; for in all the imaginings of the childhood of the race there was nothing more marvellous or more audaciously improbable than the transmission of the accents and modulations of familiar voices through long distances, and the power of communication across leagues of sea without mechanical connections of any kind.

The faculty which created the fairy tale is the same faculty which, supplemented by a broader observation and based on more accurate knowledge, has broadened the range and activities of modern man, made the world accessible to him, enabled him to live in one place but to speak and act in places thousands of miles distant, given him command of colossal forces, and is fast making him rich on a scale which would have seemed incredible to men of a half-century ago. There is nothing in any fairy tale more marvellous and inherently improbable than many of the achievements of scientific observation and invention, and we are only at the beginning of the wonders that lie within the reach of the human spirit!

No one can understand the modern world without the aid of the imagination, and as the frontiers of knowledge are pushed still further away from the obvious and familiar, there will be an increasing tax on the imagination. The world of dead matter which our fathers thought they understood has become a world of subtle forces moving with inconceivable velocity; nothing is inert, all things are transformed into other and more elusive shapes precisely as the makers of the fairy tales foresaw and predicted; the world lives in every atom just as their world lived; forces lie just outside the range of physical sight, but entirely within the range of spiritual vision, precisely as the tellers of these old stories divined; mystery and wonder enfold all things, and not only evoke the full play of the mind, but flood it with intimations and suggestions of the presence of more elusive and subtle forces, of finer and more obedient powers, as the world of fairies, magi and demons enfolded the ancient earth of daily toil and danger....