Fair to Look Upon 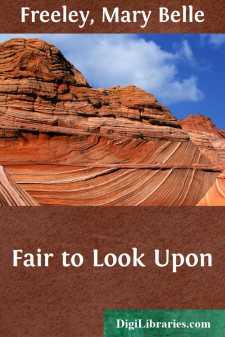 A RIPPLE OF DISSENSION AND WHAT CAME OF IT.

I was about to be married. My numerous charms and attractions had won the affections of a young man who was equally charming with myself.

We were sitting on a luxurious divan and he held my milk-white hand in his. I do not make that statement as a startling announcement of an unusual occurrence, but simply as a matter of fact.

We had been conversing about the culinary and domestic arrangements of our future home when matrimony had made us "one flesh;" or, to use English, we had been wondering what under the canopy a good cooking stove would cost, when he asked suddenly and irrelevantly,

"And you will love me, always?"

"Of course," said I, a little impatiently; for when one is deep in a mathematical problem such a question is a little annoying.

"And you will honor me always?" he next inquired.

"As long as you deserve to be honored," I replied, with the habitual good sense of my age and sex, mentally wondering if granite-ware stewpans went with a cooking stove.

"And you will obey me?" he queried next, in a tone that plainly indicated that I'd have to. I left the mathematical problem for future solution and said, hesitatingly:

"If you can?" he said, in sternly questioning tones; and a cloud no bigger than a man's hand appeared upon the heaven of our love.

"I don't believe a woman ever lived who ever obeyed any one—God, angels, or men," I cried.

"You are a traitor. You slander your sex," he exclaimed, aghast.

"I deny the charge," I replied, springing to my feet, with all the spirit of the above-mentioned age and sex. "By that assertion I only add glory to their fame." He looked at me for a little while, too surprised to speak, and then said, in sarcastic tones:

"Consider our wedding postponed until you have had a little time to study your Bible. Good night."

"'Study your Bible!' That is what everybody says when they want to prove any theory, creed, ism, or anything. I shall study my Bible diligently. Good night," I replied, thinking it was not such very bad advice after all; and then I hummed a gay little tune for his benefit until I heard the hall door close.

And I have studied my Bible with the following result.

Away back when Adam was a young man—now I know that Adam is rather an ancient subject, but you need not elevate your eyebrows in scorn, for you will be ancient yourself sometime—he found himself in Eden one day; he did not know why, but we do, don't we?

He was there because Eve was to come, and it was a foregone conclusion even in that early age that when she did appear she would want some one to hold her bouquet, open the door for her, button her gloves, tell her she was pretty and sweet and "I never saw a woman like you before," you know.

Her arrival was the greatest event the world has ever known, and the grandest preparations were made for it.

A blue sky arched gloriously over the earth, and sun, moon and stars flashed and circled into space, silvery rivers ran cool and slow through scented valleys, the trees threw cooling shadows on the fresh, damp grass, the birds sang in the rosy dawn, the flowers blushed in odorous silence and yet it was all incomplete, and Adam wandered restlessly around like a man who has lost his collar button....