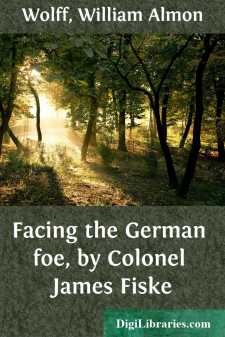 "As long as I can't be at home," said Harry Fleming, "I'd rather be here than anywhere in the world I can think of!"

"Rather!" said his companion, Dick Mercer. "I say, Harry, it must be funny to be an American!"

"I'd be angry, Dick," he said, finally, "if that wasn't so English—and so funny! Still, I suppose that's one reason you Britishers are as big an empire as you are. You think it's sort of funny and a bit of a misfortune, don't you, to be anything but English?"

"Oh, I say, I didn't quite mean that," said Dick, flushing a little. "And of course you Americans aren't just like foreigners. You speak the same language we do—though you do say some funny things now and then, old chap. You know, I was ever so surprised when you came to Mr. Grenfel and he let you in our troop right away!"

"Didn't you even know we had Boy Scouts in America?" asked Harry. "My word—as you English would say. That is the limit! Why, it's spread all over the country with us. But of course we all know that it started here—that Baden-Powell thought of the idea!"

"Rather!" said Dick, enthusiastically. "Good old Bathing-Towel! That's what they used to call him at school, you know, before he ever went into the army at all. And it stuck to him, they say, right through. Even after Mafeking he was called that. Now, of course, he's a lieutenant general, and all sorts of a swell. He and Kitchener and French are so big they don't get called nicknames much more."

"Well, I'll tell you what I think," said Harry, soberly. "I think he did a bigger thing for England when he started the Boy Scout movement than when he defended Mafeking against the Boers!"

"Why, how can you make that out?" asked Dick, puzzled. "The defence of Mafeking had a whole lot to do with our winning that war!"

"That's all right, too," said Harry. "But you know you may be in a bigger war yet than that Boer War ever thought of being."

"How can a war think, you chump?" asked the literal-minded Dick.

Again Harry roared at him.

"That's just one of 'our funny American ways of saying things,' Dick," he explained. "I didn't mean that, of course. But what I do mean is that everyone over here in Europe seems to think that there will be a big war sometime—a bigger war than the world's ever seen yet."

"Oh, yes!" Dick nodded his understanding, and grew more serious. "My pater—he's a V. C., you know—says that, too. He says we'll have to fight Germany, sooner or later. And he seems to think the sooner the better, too, before they get too big and strong for us to have an easy time with them."

"They're too big now for any nation to have an easy time with them," said Harry. "But you see what I mean now, don't you, Dick? We Boy Scouts aren't soldiers in any way. But we do learn to do the things a soldier has to do, don't we?"

"Of course not, and it's right, too," agreed Harry. "But we learn to be obedient. We learn discipline....