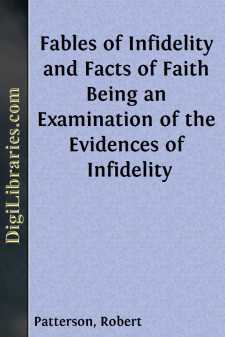 This is not so much a volume upon the Evidences of Christianity, as an examination of the Evidences of Infidelity. When the Infidel tells us that Christianity is false, and asks us to reject it, he is bound of course to provide us with something better and truer instead; under penalty of being considered a knave trying to swindle us out of our birthright, and laughed at as a fool, for imagining that he could persuade mankind to live and die without religion. Suppose he had proved to the world's satisfaction that all religion is a hoax, and all men professing it are liars, how does that comfort me in my hour of sorrow? Scoffing will not sustain a man in his solitude, when he has nobody to scoff at; and disbelief is only a bottomless tub, which will not float me across the dark river. If Infidels intend to convert the world, they must give us some positive system of truth which we can believe, and venerate, and trust.

A glimmering idea of this necessity seems lately to have dawned upon some of them. It is quite possible that they have also felt the want of something for their own souls to believe; for an Infidel has a soul, a poor, hungry, starved soul, just like other men. At any rate, having grown tired of pelting the Church with the dirtballs of Voltaire and Paine, they begin to acknowledge that it is, after all, an institution; and that the Bible is an influential book, both popular and useful in its way. Mankind, it seems, will have a Church and a Bible of some sort; why not go to work and make a Church and a Bible of their own? Accordingly they have gone to work, and in a very short time have prepared a variety of ungodly religions, so various that the worldly-minded man who can not be suited with one to his taste must be very hard to please. Discordant and contradictory in their positive statements, they are agreed only in negatives; denying the God of the Bible, the resurrection of the dead, and judgment to come. Nevertheless each discoverer or constructor presents his system to the world with great confidence, large claims to superior benevolence, vast pretensions to learning and science, and no little cant about duty and piety. Wonderful to tell, some of them are very fond of clothing their ungodliness in the language of Scripture.

No pains are spared to secure the wide spread of these notions. Prominent Infidels are invited to deliver courses of scientific lectures, in which the science is made the medium of conveying the Infidelity. Scientific books, novels, magazines, daily newspapers, and common school books, are all enlisted in the work. The disciples of Infidelity are numerous and zealous. It would be hard to find a factory, boarding-house, steamboat or hotel where twelve persons are employed, without an Infidel; and harder still to find an Infidel who will not use his influence to poison his associates.

These systems are well adapted to the depraved tastes of the age. The business man, whose whole soul is set on money-making and spending, is right glad to meet the Secularist, who will prove to him on scientific principles, that a man is much profited by gaining the whole world, even at the risk of his soul, if he has such a thing....