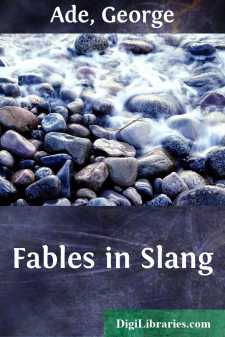 THE FABLE OF THE VISITOR WHO GOT A LOT FOR THREE DOLLARS.

The Learned Phrenologist sat in his Office surrounded by his Whiskers.

Now and then he put a Forefinger to his Brow and glanced at the Mirror to make sure that he still resembled William Cullen Bryant.

Near him, on a Table, was a Pallid Head made of Plaster-of-Paris and stickily ornamented with small Labels. On the wall was a Chart showing that the Orangoutang does not have Daniel Webster's facial angle.

"Is the Graft played out?" asked the Learned Phrenologist, as he waited. "Is Science up against it or What?"

Then he heard the fall of Heavy Feet and resumed his Imitation. The Door opened and there came into the Room a tall, rangy Person with a Head in the shape of a Rocky Ford Cantaloupe.

Aroused from his Meditation, the Learned Phrenologist looked up at the Stranger as through a Glass, darkly, and pointed to a Red Plush Chair.

The Easy Mark collapsed into the Boarding-House Chair and the Man with more Whiskers than Darwin ever saw stood behind Him and ran his Fingers over his Head, Tarantula-Wise.

"Well, well!" said the Learned Phrenologist "Enough Benevolence here to do a family of Eight. Courage? I guess yes! Dewey's got the same kind of a Lump right over the Left Ear. Love of Home and Friends—like the ridge behind a Bunker! Firmness—out of sight! Reverence—well, when it comes to Reverence, you're certainly There with the Goods! Conscientiousness, Hope, and Ideality—the Limit! And as for Metaphysical Penetration—oh, Say, the Metaphysical Penetration, right where you part the Hair—oh, Laura! Say, you've got Charles Eliot Norton whipped to a Custard. I've got my Hand on it now. You can feel it yourself, can't you?"

"I can feel Something," replied the Human Being, with a rapt Smile.

"Wit, Compassion and Poetic Talent—right here where I've got my Thumb—a Cinch! I think you'll run as high as 98 per cent on all the Intellectual Faculties. In your Case we have a Rare Combination of Executive Ability, or the Power to Command, and those Qualities of Benevolence and Ideality which contribute to the fostering of Permanent Religious Sentiment. I don't know what your present Occupation is, but you ought to be President of a Theological Seminary. Kindly slip me Three Dollars before you Pass Out."

The Tall Man separated himself from Two Days' Pay and then went out on the Street and pushed People off the Sidewalk, He thought so well of Himself.

Thereafter, as before, he drove a Truck, but he was always glad to know that he could have been President of a Theological Seminary.

Moral: A good Jolly is worth Whatever you Pay for it.

Once upon a Time there was a slim Girl with a Forehead which was Shiny and Protuberant, like a Bartlett Pear. When asked to put Something in an Autograph Album she invariably wrote the Following, in a tall, dislocated Back-Hand:

"Life is Real; life is Earnest,And the Grave is not its Goal."

That's the kind of a Girl she was.

In her own Town she had the Name of being a Cold Proposition, but that was because the Primitive Yokels of a One-Night Stand could not Attune Themselves to the Views of one who was troubled with Ideals. Her Soul Panted for the Higher Life.

Alas, the Rube Town in which she Hung Forth was given over to Croquet, Mush and Milk Sociables, a lodge of Elks and two married Preachers who doctored for the Tonsilitis. So what could the Poor Girl do?

In all the Country around there was not a Man who came up to her Plans and Specifications for a Husband. Neither was there any Man who had any time for Her. So she led a lonely Life, dreaming of the One—the Ideal. He was a big and pensive Literary Man, wearing a Prince Albert coat, a neat Derby Hat and godlike Whiskers. When He came he would enfold Her in his Arms and whisper Emerson's Essays to her.

But the Party failed to show up.

Often enough she put on her Chip Hat and her Black Lisle Gloves and Sauntered down to look at the Gang sitting in front of the Occidental Hotel, hoping that the Real Thing would be there. But she always saw the same old line of Four-Flush Drummers from Chicago and St. Louis, smoking Horrid Cigars and talking about the Percentages of the League Teams.

She knew that these Gross Creatures were not prone to chase mere Intellectual Splendor, so she made no effort to Flag them.

When she was Thirty-Four years of age and was able to recite "Lucile" without looking at the Book she was Married to a Janitor of the name of Ernest. He had been kicked in the Head by a Mule when young and believed everything he read in the Sunday Papers. His pay was Twenty-Three a month, which was high, if you knew Ernest.

His Wife wore a red Mother Hubbard all during the Remainder of her Life.

THE FABLE OF THE NEW YORK PERSON WHO GAVE THE STAGE FRIGHT TO FOSTORIA, OHIO

A New York man went to visit a Cousin in the Far West.

The name of the Town was Fostoria, Ohio.

When he came into Town he had his Watch-Chain on the outside of his Coat, and his Pink Spats were the first ever seen in Fostoria.

"Have you a Manicure Parlor in this Beastly Hole?" asked the New York Man, as they walked up from the Train.

"What's that?" asked the Cousin, stepping on his own Feet.

"Great Heavens!" exclaimed the New York Man, and was silent for several Moments.

At Dinner he called for Artichokes, and when told that there were none, he said, "Oh, very well," in a Tone of Chastened Resignation.

After Dinner he took the Family into the Parlor, and told the Members how much they would Enjoy going to Weber and Fields'....