Fables For The Times 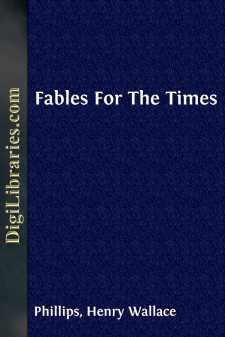 The Baa-Sheep and the Lion.

A baa-sheep was lying under the paw of a black-maned lion. Whatever was going to be done had to be done quickly. A thought flashed upon the sheep and he said:

"Most dread lord and master, I have heard your voice extolled beyond that of all others. Will you not sing me a little selection from Wagner before I die?"

The lion, touched in his vanity, immediately started up and roared away until the goose-flesh stood out on the rocks. When he had finished, the sheep was in tears.

"What means this?" growled the lion in a rage. "Do you presume to criticise my singing?"

"Oh, no!" sobbed the sheep. "That is not it. But I have heard that wool was the worst thing in the world for the voice, and when I think of the ruin of that beautiful organ of yours, consequent upon eating me, I weep to think that I was not born hairless."

The lion regarded him out of the corner of his eye. Then, in his grandest manner, said: "Run along home to your ma, little sheep; I was only playing with you," and walked off through the forest with a great deal of dignity.

The Baa-Sheep and the Lion The Dog and the Meat.

A dog with a piece of meat in his mouth was crossing a bridge over a placid stream. On looking down he saw another dog with a precisely similar piece of meat in the water below him. "That's a singular incident," he thought to himself as he prepared to jump in. "But hold a minute! The angle of incidence is always equal to the angle of reflection. Upon reflection, I find that the other dog and the meat are only optical phenomena." And he trotted on his way to Boston without further thought about the matter.

The Dog and the Meat The Fox and the Grapes.

A fox stood under an apple-tree and gazed up earnestly at the globes of yellow lusciousness. "How sad, for the sake of an old-time piece of literature," he said, "that the fox is a carnivorous animal and doesn't care particularly about fruit!"

We all have plenty of faults without the Truly Good taking the trouble to invent them for us.

A crow, having stolen a piece of flesh, perched in a tree to enjoy it at leisure. A fox saw her, and, being hungry, thought he would employ a little diplomacy to get the meat away from her.

"What a prima-donna the crow would be," he said, looking at her with mock admiration, "if she only had a voice proportional to her other attractions!"

The crow promptly dropped the piece of flesh on his head, completely blinding him, and before he could recover from his surprise, lit on his back and began to peck him viciously. "I'll have you to know," she cawed, "that I'm a proper lady, and the man that compares me to them shameless French singing hussies is going to get hurt."

Don't praise the soft whiteness of a labor delegate's hands.

The Fox and the Crow The Ass in the Lion's Skin.

An ass, by some means unknown to the writer, having managed to get into a lion's skin, ran around the neighborhood frightening the beasts into fits....