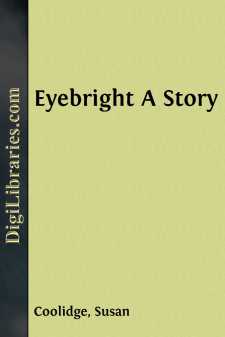 It wanted but five minutes to twelve in Miss Fitch's schoolroom, and a general restlessness showed that her scholars were aware of the fact. Some of the girls had closed their books, and were putting their desks to rights, with a good deal of unnecessary fuss, keeping an eye on the clock meanwhile. The boys wore the air of dogs who see their master coming to untie them; they jumped and quivered, making the benches squeak and rattle, and shifted their feet about on the uncarpeted floor, producing sounds of the kind most trying to a nervous teacher. A general expectation prevailed. Luckily, Miss Fitch was not nervous. She had that best of all gifts for teaching,—calmness; and she understood her pupils and their ways, and had sympathy with them. She knew how hard it is for feet with the dance of youth in them to keep still for three long hours on a June morning; and there was a pleasant, roguish look in her face as she laid her hand on the bell, and, meeting the twenty-two pairs of expectant eyes which were fixed on hers, rang it—dear Miss Fitch—actually a minute and a half before the time.

At the first tinkle, like arrows dismissed from the bow-string, two girls belonging to the older class jumped from their seats and flew, ahead of all the rest, into the entry, where hung the hats and caps of the school, and their dinner-baskets. One seized a pink sun-bonnet from its nail, the other a Shaker-scoop with a deep green cape; each possessed herself of a small tin pail, and just as the little crowd swarmed into the passage, they hurried out on the green, in the middle of which the schoolhouse stood. It was a very small green, shaped like a triangle, with half a dozen trees growing upon it; but

you know, and to Miss Fitch's little men and women "the Green" had all the importance and excitement of a park. Each one of the trees which stood upon it possessed a name of its own. Every crotch and branch in them was known to the boys and the most daring among the girls; each had been the scene of games and adventures without number. "The Castle," a low spreading oak with wide, horizontal branches, had been the favorite tree for fights. Half the boys would garrison the boughs, the other half, scrambling from below and clutching and tugging, would take the part of besiegers, and it had been great fun all round. But alas, for that "had been!" Ever since one unlucky day, when Luther Bradley, as King Charles, had been captured five boughs up by Cromwell and his soldiers, and his ankle badly sprained in the process, Miss Fitch had ruled that "The Castle" should be used for fighting purposes no longer. The boys might climb it, but they must not call themselves a garrison, nor pull nor struggle with each other. So the poor oak was shorn of its military glories, and forced to comfort itself by bearing a larger crop of acorns than had been possible during the stirring and warlike times, now for ever ended.

Then there was "The Dove-cote," an easily climbed beech, on which rows of girls might be seen at noon-times roosting like fowls in the sun. And there was "The Falcon's Nest," which produced every year a few small, sour apples, and which Isabella Bright had adopted for her tree. She knew every inch of the way to the top; to climb it was like going up a well-known staircase, and the sensation of sitting there aloft, high in air, on a bough which curved and swung, with another bough exactly fitting her back to lean against, was full of delight and fascination. It was like moving and being at rest all at once; like flying, like escape. The wind seemed to smell differently and more sweetly up there than in lower places. Two or three times lost in fancies as deep as sleep, Isabella had forgotten all about recess and bell, and remained on her perch, swinging and dreaming, till some one was sent to tell her that the arithmetic class had begun. And once, direful day! marked with everlasting black in the calendar of her conscience, being possessed suddenly, as it were, by some idle and tricksy demon, she stayed on after she was called, and, called again, she still stayed; and when, at last, Miss Fitch herself came out and stood beneath the tree, and in her pleasant, mild voice told her to come down, still the naughty girl, secure in her fastness, stayed....