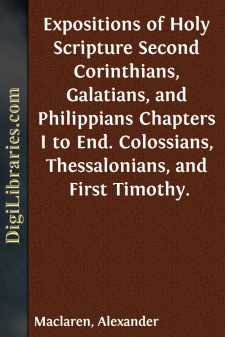 Having therefore these promises . . . let us cleanse ourselves from all filthiness of the flesh and spirit, perfecting holiness in the fear of God.'—2 Cor. vii. 1.

It is often made a charge against professing Christians that their religion has very little to do with common morality. The taunt has sharpened multitudes of gibes and been echoed in all sorts of tones: it is very often too true and perfectly just, but if ever it is, let it be distinctly understood that it is not so because of Christian men's religion but in spite of it. Their bitterest enemy does not condemn them half so emphatically as their own religion does: the sharpest censure of others is not so sharp as the rebukes of the New Testament. If there is one thing which it insists upon more than another, it is that religion without morality is nothing—that the one test to which, after all, every man must submit is, what sort of character has he and how has he behaved—is he pure or foul? All high-flown pretension, all fervid emotion has at last to face the question which little children ask, 'Was he a good man?'

The Apostle has been speaking about very high and mystical truths, about all Christians being the temple of God, about God dwelling in men, about men and women being His sons and daughters; these are the very truths on which so often fervid imaginations have built up a mystical piety that had little to do with the common rules of right and wrong. But Paul keeps true to the intensely practical purpose of his preaching and brings his heroes down to the prosaic earth with the homely common sense of this far-reaching exhortation, which he gives as the fitting conclusion for such celestial visions.

I. A Christian life should be a life of constant self-purifying.

This epistle is addressed to the church of God which is at Corinth with all the saints which are in all Achaia.

Looking out over that wide region, Paul saw scattered over godless masses a little dispersed company to each of whom the sacred name of Saint applied. They had been deeply stained with the vices of their age and place, and after a black list of criminals he had had to say to them 'such were some of you,' and he lays his finger on the miracle that had changed them and hesitates not to say of them all, 'But ye are washed, but ye are sanctified, but ye are justified in the name of the Lord Jesus and by the Spirit of our God.'

The first thing, then, that every Christian has is a cleansing which accompanies forgiveness, and however his garment may have been 'spotted by the flesh,' it is 'washed and made white in the blood of the Lamb.' Strange cleansing by which black stains melt out of garments plunged in red blood! With the cleansing of forgiveness and justification comes, wherever they come, the gift of the Holy Spirit—a new life springing up within the old life, and untouched by any contact with its evils. These gifts belong universally to the initial stage of the Christian life and require for their possession only the receptiveness of faith....