Expositions of Holy Scripture Ezekiel, Daniel, and the Minor Prophets. St Matthew Chapters I to VIII 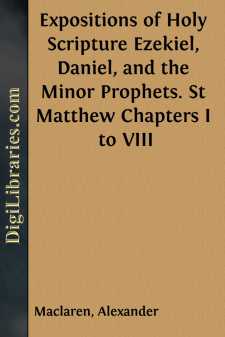 THE BOOK OF EZEKIEL CHAMBERS OF IMAGERY

'Then said He unto me, Son of man, hast thou seen what the ancients of the house of Israel do in the dark, every man in the chambers of his imagery!'—EZEKIEL viii. 12.

This is part of a vision which came to the prophet in his captivity. He is carried away in imagination from his home amongst the exiles in the East to the Temple of Jerusalem. There he sees in one dreadful series representations of all the forms of idolatry to which the handful that were left in the land were cleaving. There meets him on the threshold of the court 'the image of jealousy,' the generalised expression for the aggregate of idolatries which had stirred the anger of the divine husband of the nation. Then he sees within the Temple three groups representing the idolatries of three different lands. First, those with whom my text is concerned, who, in some underground room, vaulted and windowless, were bowing down before painted animal forms upon the walls. Probably they were the representatives of Egyptian worship, for the description of their temple might have been taken out of any book of travels in Egypt in the present day. It is only an ideal picture that is represented to Ezekiel, and not a real fact. It is not at all probable that all these various forms of idolatry were found at any time within the Temple itself. And the whole cast of the vision suggests that it is an ideal picture, and not reality, with which we have to do. Hence the number of these idolaters was seventy—the successors of the seventy whom Moses led up to Sinai to see the God of Israel! And now here they are grovelling before brute forms painted on the walls in a hole in the dark. Their leader bears a name which might have startled them in their apostasy, and choked their prayers in their throats, for Jaazan-iah means 'the Lord hears.' Each man has a censer in his hand—self-consecrated priests of self-chosen deities. Shrouded in obscurity, they pleased themselves with the ancient lie, 'The Lord sees not; He hath forsaken the earth.' And then, into that Sanhedrim of apostates there comes, all unknown to them, the light of God's presence; and the eye of the prophet marks their evil.

I have nothing to do here with the other groups which Ezekiel saw in his vision. The next set were the representatives of the women of Israel, who, false at once to their womanhood and to their God, were taking part in the nameless obscenities and abominations of the worship of the Syrian Adonis. And the next, who from their numbers seem to be intended to stand for the representatives of the priesthood, as the former were of the whole people, represent the worshippers who had fallen under the fascinations of a widespread Eastern idolatry, and with their backs to the house of the Lord were bowing before the rising sun.

All these false faiths got on very well together. Their worshippers had no quarrel with each other. Polytheism, by its very nature and the necessity of its being, is tolerant. All its rabble of gods have a mutual understanding, and are banded together against the only One that says, 'Thou shalt have none other gods beside Me.'

But now, I take this vision in a meaning which the prophet had no intention to put on it....