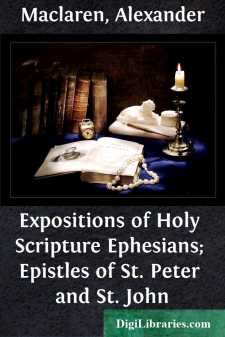 'The saints which are at Ephesus and the faithful in Christ Jesus.'—Eph. i. 1.

That is Paul's way of describing a church. There were plenty of very imperfect Christians in the community at Ephesus and in the other Asiatic churches to which this letter went. As we know, there were heretics amongst them, and many others to whom the designation of 'holy' seemed inapplicable. But Paul classes them all under one category, and describes the whole body of believing people by these two words, which must always go together if either of them is truly applied, 'saints' and 'faithful.'

Now I think that from this simple designation we may gather two or three very obvious indeed, and very familiar and old-fashioned, but also very important, thoughts.

I. A Christian is a saint.

We are accustomed to confine the word to persons who tower above their brethren in holiness and manifest godliness and devoutness. The New Testament never does anything like that. Some people fancy that nobody can be a saint unless he wears a special uniform of certain conventional sanctities. The New Testament does not take that point of view at all, but regards all true believers in Jesus Christ as being, therein and thereby, saints.

Now, what does it mean by that? The word at bottom simply signifies separation. Whatever is told off from a mass for a specific purpose would be called, if it were a thing, 'holy.' But there is one special kind of separation which makes a person a saint, and that is separation to God, for His uses, in obedience to His commandment, that He may employ the man as He will. So in the Old Testament the designation 'holy' was applied quite as much to the high priest's mitre or to the sacrificial vessels of the Temple as it was to the people who used them. It did not imply originally, and in the first place, moral qualities at all, but simply that this person or that thing belonged to God. But then you cannot belong to God unless you are like Him. There can be no consecration to God except the heart is being purified. So the ordinary meaning of holiness, as moral purity and cleanness from sin, necessarily comes from the original meaning, separation and devotion to the service of God.

Thus we get the whole significance of Christian holiness. We are to belong to God, and to know that we do belong to Him. We are to be separated from the mass of people and things that have no consciousness of ownership and do not yield themselves up to Him for His use. But we cannot belong to Him, and be devoted to His service, unless we are being made day by day pure in heart, and like Him to whom we say that we belong. A human being can only be God's by the surrender of heart and will, and through the continual appropriation into his own character and life, of righteousness and purity like that which belongs to God. Holiness is God's stamp upon a man, His 'mark,' by which He says—This man belongs to Me. As you write your name in a book, so God writes His name on His property, and the name that He writes is the likeness of His own character.

Note, again, that in God's church there is no aristocracy of sanctity, nor does the name of saint belong only to those who live high above the ordinary tumults of life and the secularities of daily duty. You may be as true a saint in a factory—ay! and a far truer one—than in a hermitage. You do not need to cultivate a mediæval or Roman Catholic type of ascetic piety in order to be called saints. You do not need to be amongst the select few to whom it is given here upon earth, but not given without their own effort, to rise to the highest summits of holy conformity with the divine will. But down amongst all the troubles and difficulties and engrossing occupations of our secular work, you may be living saintly lives; for the one condition of being holy is that we should know whose we are and whom we serve, and we can carry the consciousness of belonging to Him into every corner of the poorest, most crowded, and most distracted life, recognising His presence and seeking to do His will. The saint is the man who says, 'O Lord, truly I am Thy servant; Thou hast loosed my bonds.' Because He has loosed my bonds, the bonds that held me to my sins, He has therein fastened me with far more stringent bonds of love to the sweet and free service of His redeeming love....