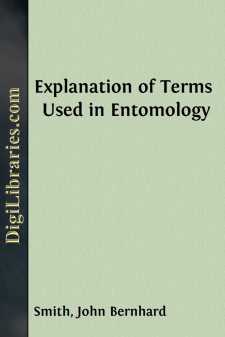 When, some time since, in consequence of continuing demands, the Brooklyn Entomological Society resolved to publish a new edition of its Explanation of Terms used in Entomology, and entrusted the writer and two associates with the task of preparing the same, it was believed that a little revision of definitions, the dropping of a few obsolete terms and the addition of a few lately proposed, would be all that was necessary. It was to be a light task to fill idle time in summer, report to be made in fall. Two years have passed since that time; the associates have dropped by the way; the manuscript contains five times the number of terms in the original "Explanation." and if it is published now, it is not because I believe it to be complete; but because I do not believe it can be made complete except as the result of criticism and voluntary addition by specialists throughout the country.

It is twenty-six years since the original list was published and nothing can better illustrate the advances made than a comparison between the old and the new Glossary. No one realizes better than I the fact that as students have increased in each order, each has followed an independent line of research, absolutely without regard to the work done elsewhere. In consequence, we have several terms for the same thing in many cases and, in an equal number, several meanings to the same term. As no one man can now-a-days cover the entire field of Entomology, it goes without saying that I was compelled to rely partly upon books and partly upon the good nature of correspondents to make the work even approximately complete.

The first notable contribution came from Professor Justus W. Folsom, of Urbana, Illinois, who sent me over 2000 cards of terms collected by himself and his assistants, and these added materially at the beginning of the work. A number of correspondents were good enough to send in lists of terms in Coleoptera, Lepidoptera, Orthoptera, Hemiptera and Neuroptera, and to refer me to literature where explanations of other special terms could be found.

After the cards were so far advanced as to warrant a preliminary manuscript, Dr. Philip P. Calvert of the University of Pennsylvania. Mr. Nathan Banks of Washington, D. C., and Mr. C. W. Johnson of the Boston Society of Natural History went carefully over the entire work and by their criticisms and additions contributed materially to such merit as it possesses. To these gentlemen and to the many others not specifically mentioned I give thanks for their assistance, and if there have not been more co-workers it has been only because of the time element that seems to demand the best that is ready, rather than a delay to secure perfection.

It would be interesting to go at length into the history of the correspondence to determine what sort of terms should or should not be included and to bring out the hopeless divergencies existing ; but all that is important here is to state briefly what has been included and what omitted....