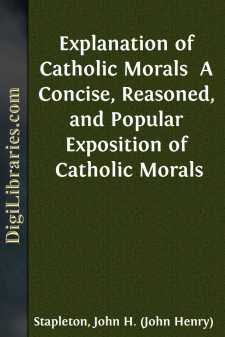 MORALS pertain to right living, to the things we do, in relation to God and His law, as opposed to right thinking, to what we believe, to dogma. Dogma directs our faith or belief, morals shape our lives. By faith we know God, by moral living we serve Him; and this double homage, of our mind and our works, is the worship we owe our Creator and Master and the necessary condition of our salvation.

Faith alone will save no man. It may be convenient for the easy-going to deny this, and take an opposite view of the matter; but convenience is not always a safe counsellor. It may be that the just man liveth by faith; but he lives not by faith alone. Or, if he does, it is faith of a different sort from what we define here as faith, viz., a firm assent of the mind to truths revealed. We have the testimony of Holy Writ, again and again reiterated, that faith, even were it capable of moving mountains, without good works is of no avail. The Catholic Church is convinced that this doctrine is genuine and reliable enough to make it her own; and sensible enough, too. For faith does not make a man impeccable; he may believe rightly, and live badly. His knowledge of what God expects of him will not prevent him from doing just the contrary; sin is as easy to a believer as to an unbeliever. And he who pretends to have found religion, holiness, the Holy Ghost, or whatever else he may call it, and can therefore no longer prevaricate against the law, is, to common-sense people, nothing but a sanctified humbug or a pious idiot.

Nor are good works alone sufficient. Men of emancipated intelligence and becoming breadth of mind, are often heard to proclaim with a greater flourish of verbosity than of reason and argument, that the golden rule is religion enough for them, without the trappings of creeds and dogmas; they respect themselves and respect their neighbors, at least they say they do, and this, according to them, is the fulfilment of the law. We submit that this sort of worship was in vogue a good many centuries before the God-Man came down upon earth; and if it fills the bill now, as it did in those days, it is difficult to see the utility of Christ's coming, of His giving of a law of belief and of His founding of a Church. It is beyond human comprehension that He should have come for naught, labored for naught and died for naught. And such must be the case, if the observance of the natural law is a sufficient worship of the Creator. What reasons Christ may have had for imposing this or that truth upon our belief, is beside the question; it is enough that He did reveal truths, the acceptance of which glorifies Him in the mind of the believer, in order that the mere keeping of the commandments appear forthwith an insufficient mode of worship.

Besides, morals are based on dogma, or they have no basis at all; knowledge of the manner of serving God can only proceed from knowledge of who and what He is; right living is the fruit of right thinking. Not that all who believe rightly are righteous and walk in the path of salvation: losing themselves, these are lost in spite of the truths they know and profess; nor that they who cling to an erroneous belief and a false creed can perform no deed of true moral worth and are doomed; they may be righteous in spite of the errors they profess, thanks alone to the truths in their creeds that are not wholly corrupted....