Experiments upon magnesia alba, Quicklime, and some other Alcaline Substances 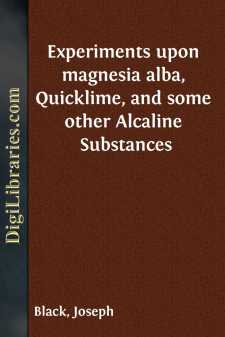 Hoffman, in one of his observations, gives the history of a powder called magnesia alba, which had long been used and esteemed as a mild and tasteless purgative; but the method of preparing it was not generally known before he made it public.

It was originally obtained from a liquor called the mother of nitre, which is produced in the following manner:

Salt-petre is separated from the brine which first affords it, or from the water with which it is washed out of nitrous earths, by the process commonly used in crystallizing salts. In this process the brine is gradually diminished, and at length reduced to a small quantity of an unctuous bitter saline liquor, affording no more salt-petre by evaporation; but, if urged with a brisk fire, drying up into a confused mass which attracts water strongly, and becomes fluid again when exposed to the open air.

To this liquor the workmen have given the name of the mother of nitre; and Hoffman, finding it composed of the magnesia united to an acid, obtained a separation of these, either by exposing the compound to a strong fire in which the acid was dissipated and the magnesia remained behind, or by the addition of an alkali which attracted the acid to itself: and this last method he recommends as the best. He likewise makes an inquiry into the nature and virtues of the powder thus prepared; and observes, that it is an absorbent earth which joins readily with all acids, and must necessarily destroy any acidity it meets in the stomach; but that its purgative power is uncertain, for sometimes it has not the least effect of that kind. As it is a mere insipid earth, he rationally concludes it to be purgative only when converted into a sort of neutral salt by an acid in the stomach, and that its effect is therefore proportional to the quantity of this acid.

Altho' magnesia appears from this history of it to be a very innocent medicine, yet having observed, that some hypochondriacs who used it frequently, were subject to flatulencies and spasms, he seems to have suspected it of some noxious quality. The circumstances however which gave rise to his suspicion, may very possibly have proceeded from the imprudence of his patients, who, trusting too much to magnesia, (which is properly a palliative in that disease,) and neglecting the assistance of other remedies, allowed their disorder to increase upon them. It may indeed be alledged, that magnesia, as a purgative, is not the most eligible medicine for such constitutions, as they agree best with those that strengthen, stimulate and warm; which the saline purges commonly used are not observed to do. But there seems at least to be no objection to its use when children are troubled with an acid in their stomach; for gentle purging in this case is very proper, and it is often more conveniently procured by means of magnesia than of any other medicine, on account of its being intirely insipid.

The above-mentioned Author observing, some time after, that a bitter saline liquor, similar to that obtained from the brine of salt-petre, was likewise produced by the evaporation of those waters which contain common salt, had the curiosity to try if this would also yield a magnesia. The experiment succeeded: and he thus found out another process for obtaining this powder, and at the same time assured himself by experiments, that the product from both was exactly the same.

My curiosity led me some time ago to inquire more particularly into the nature of magnesia, and especially to compare its properties with those of the other absorbent earths, of which there plainly appeared to me to be very different kinds, altho' commonly confounded together under one name....