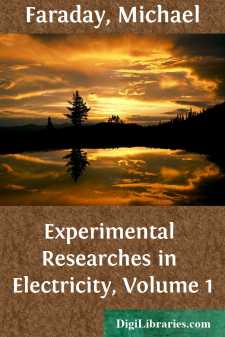 6. About twenty-six feet of copper wire one twentieth of an inch in diameter were wound round a cylinder of wood as a helix, the different spires of which were prevented from touching by a thin interposed twine. This helix was covered with calico, and then a second wire applied in the same manner. In this way twelve helices were superposed, each containing an average length of wire of twenty-seven feet, and all in the same direction. The first, third, fifth, seventh, ninth, and eleventh of these helices were connected at their extremities end to end, so as to form one helix; the others were connected in a similar manner; and thus two principal helices were produced, closely interposed, having the same direction, not touching anywhere, and each containing one hundred and fifty-five feet in length of wire.

7. One of these helices was connected with a galvanometer, the other with a voltaic battery of ten pairs of plates four inches square, with double coppers and well charged; yet not the slightest sensible reflection of the galvanometer-needle could be observed.

8. A similar compound helix, consisting of six lengths of copper and six of soft iron wire, was constructed. The resulting iron helix contained two hundred and fourteen feet of wire, the resulting copper helix two hundred and eight feet; but whether the current from the trough was passed through the copper or the iron helix, no effect upon the other could be perceived at the galvanometer.

9. In these and many similar experiments no difference in action of any kind appeared between iron and other metals.

10. Two hundred and three feet of copper wire in one length were coiled round a large block of wood; other two hundred and three feet of similar wire were interposed as a spiral between the turns of the first coil, and metallic contact everywhere prevented by twine. One of these helices was connected with a galvanometer, and the other with a battery of one hundred pairs of plates four inches square, with double coppers, and well charged. When the contact was made, there was a sudden and very slight effect at the galvanometer, and there was also a similar slight effect when the contact with the battery was broken. But whilst the voltaic current was continuing to pass through the one helix, no galvanometrical appearances nor any effect like induction upon the other helix could be perceived, although the active power of the battery was proved to be great, by its heating the whole of its own helix, and by the brilliancy of the discharge when made through charcoal.

11. Repetition of the experiments with a battery of one hundred and twenty pairs of plates produced no other effects; but it was ascertained, both at this and the former time, that the slight deflection of the needle occurring at the moment of completing the connexion, was always in one direction, and that the equally slight deflection produced when the contact was broken, was in the other direction; and also, that these effects occurred when the first helices were used (6....