Exiled for the Faith A Tale of the Huguenot Persecution 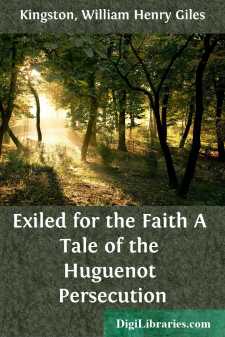 “Just what brought you to France, fair cousin?”

The question was put by a beautiful girl scarcely yet verging on womanhood to a fine intelligent youth, two or three years her senior, as they paced slowly on together through the gardens of the Louvre on the banks of the Seine, flowing at that period bright and clear amid fields and groves. Before them rose the stately palace lately increased and adorned by Henry the Second, the then reigning monarch of France, with its lofty towers, richly carved columns, and numerous rows of windows commanding a view over the city on one side, and across green fields and extensive forests, and far up and down the river on the other.

The walk along which the young people were proceeding was shaded by tall trees, the thick boughs of which kept off the rays of the sun, shining brightly on the gay flowers and glittering fountains, seen in the open space beyond them.

The young girl had the air and manner of a grown-up person, with that perfect self-possession which seems natural to those brought up in the atmosphere of a court.

Her companion’s manner formed a contrast to hers; but though evidently not at all at his ease, as a brave man does when called upon to encounter danger, he had braced himself up to face those he might have to meet, who would, he naturally felt, look down on him on account of his travel-stained dress, his Scottish accent, and rustic appearance.

“In truth, Cousin Mary, I left Scotland as many of our countrymen are compelled to do, to seek my fortune abroad, and have come with letters of introduction to several noblemen and others; among them to Admiral Coligny, my father’s old comrade in arms. Our castle is well-nigh in ruins, and my estate yields scarcely revenue sufficient to supply me with clothes and arms, much less to restore it as I wished to have done. I have already made two voyages to far-off lands, and come back no richer than I went, and have at length resolved to take service in the navy of France, in which I may hope to carve out my way to distinction, with the help of the admiral.”

“He may be ready enough to receive you and afford you his patronage; but I warn you, Cousin Nigel, that he may be less able to forward your interests than you may suppose. He is known to hold the principles of the leaders of those dangerous people the Protestants, who are hated and feared at court, where the Guises, the brothers of the Queen Regent of Scotland, have of late gained the chief influence. Take my advice, Cousin Nigel, seek some more profitable patron, and have nothing to do with the Huguenots.”

“I thank you for your advice, cousin. I must confess, however, that I do not hold the opinion you express of the Protestants, but on the contrary, am greatly inclined to agree with their principles. I lately heard a wonderful preacher, one John Knox, who has appeared in Scotland, and brought thousands to see the gross errors of the papal system. He proves clearly that the Pope of Rome has no real ground for his pretensions to be the head of Christ’s Church on earth; that he cannot be the successor of the apostle Peter, who never was Bishop of Rome; but that he is rather the successor of the great heathen high priest, whose idolatries he perpetuates and supports, and that therefore he and his cardinals and priests are impostors, who should on no account be obeyed....