Evolution An Investigation and a Critique 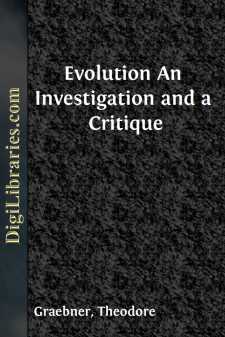 I first read Charles Darwin's "Origin of Species" in the library of my sainted uncle, John Schaller, at New Ulm, Minnesota, in 1892. I did not comprehend all of it then, a cause, to me, of considerable chagrin, for which I later found some consolation in the opinion of Dr. Frederick Lynch, who pronounces Darwin's epochal work "one of the two most difficult books in the English language." But like many others, I understood enough of Darwin's book to catch glimpses of the grandeur of the conception which underlies its argumentation. It was then that my beloved uncle, out of that wide and accurate reading which so frequently astonished his friends, and with that penetrating dialectic of his, opened my eyes to certain fallacies in Darwin's argument, especially to the fatal weakness of the chapter on Instinct. The reading of St. George Mivart's book "The Genesis of Species" later convinced me of the accuracy of my uncle's judgment. But the fascination of the subject persisted, and for a time Herbert Spencer's "Synthetic Philosophy," by the comprehensiveness of its induction and its vast array of data, exercised its thrall. Alfred Russel Wallace's "Darwinism," Huxley's "Lectures on Evolution," Tyndall's "The Beginning of Things," Grant Allen's "The Evolutionist at Large," Eimer's "Orthogenesis," Clodd's "Story of Creation," occupied me in turn, until the apodictic presentation of John Fiske's Essays on Darwinism, no less than the open and haggard opposition to Christianity which prevails in Huxley's "Science and Hebrew Tradition" and in Spencer's chapters on "The Unknowable" (so the Synthetic Philosophy denominates God), caused a revulsion of sentiment,—the anti-religious bias of evolution standing forth the clearer to my mind, the longer I occupied myself with the subject.

I determined to investigate for myself the data on which the speculations whose mazes I had trod these years were built up. The leisure hours of three years were devoted to the study of first-hand sources of Comparative Religion. The result of this research was deposited in two articles contributed to the Theological Quarterly in 1906 and 1907. I fear that the forbidding character of the foot-notes served as an effective deterrent to the reading of these articles. I have now given, in several chapters of this little volume, in popular language the argument against evolution to be derived from the study of Religion. The reading of Le Conte's and Dana's text-books of geology and various other treatises supplied the data on palaeontology embodied in the first chapters of the book. The notable circulus in concludendo ("begging the question") of which evolutionists here are guilty was first pointed out to me by Prof. Tingelstad of Decorah, Iowa, who was in 1908 taking a course in Evolution at Chicago University, and who called on me for discussion of the doctrine as he received it from "head-quarters."

An an excursus in the subject of Pedagogy, I have treated in my Seminary lectures the past years, under the head of natural sciences, the argument against evolution, and the outlines of these lectures have furnished the framework for the present volume....