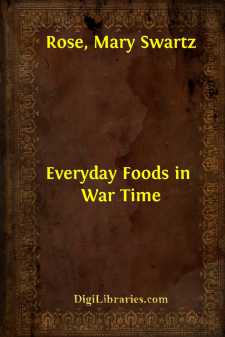 CHAPTER I THE MILK PITCHER IN THE HOME

(Reprinted from The Farmer's Wife, by permission of the Webb Publishing Company.)

There is a quaint old fairy tale of a friendly pitcher that came and took up its abode in the home of an aged couple, supplying them from its magic depths with food and drink and many other comforts. Of this tale one is reminded in considering the place of the milk pitcher in the home. How many housewives recognize the bit of crockery sitting quietly on the shelf as one of their very best friends? How many know that it will cover many of their mistakes in the choice of food for their families? That it contains mysterious substances upon which growth depends? That it stands ready to save them both work and worry in regard to food? That it is really the only indispensable article on the bill of fare?

Diet is like a house, a definite thing, though built of different kinds of material. For a house we need wall material, floor material, window, ceiling, chimney stuffs and so forth. We may, if we like, make floors, walls, and ceilings all of the same kind of stuff, wood for example, but we should need glass for windows and bricks or tile for chimneys. Or, again, we may choose brick for walls, floors, and chimneys but it would not do any better than wood for windows, would be rather unsatisfactory for ceilings, and impossible for doors. In other words, we could not build a modern house from one kind of material only and we really need at least four to carry out even a simple plan.

In a similar fashion, diet is constructed from fuel material, body-building material and body-regulating material. No diet is perfect in which these are not all represented. Now, foods are like sections of houses. Some correspond to single parts, as a floor or a window or perhaps a chimney; others to a house complete except for windows and roof; still others to a house lacking only a door or two. It takes some thought to put them together so that we shall have all kinds of parts without a great many extra ones of certain kinds and not enough of others.

Milk is unique in that it comes nearest of all foods to being a complete diet in itself. It is like the house with only a door missing. We could be quite comfortable in such a house for a long time though we could make a more complete diet by adding some graham bread or an apple or some spinach.

We all associate milk with cows and cows with farms, but how closely is milk associated with the farm table? Is it prized as the most valuable food which the farm produces? Every drop should be used as food; and this applies to skim milk, sour milk, and buttermilk as well as sweet milk. Do we all use milk to the best advantage in the diet? Here are a few points which it is well to bear in mind:

Milk will take the place of meat. The world is facing a meat famine. The famine was on the way before the war began but it has approached with tremendous speed this last year. Every cow killed and eaten means not only so much less meat available but so much less of an adequate substitute....