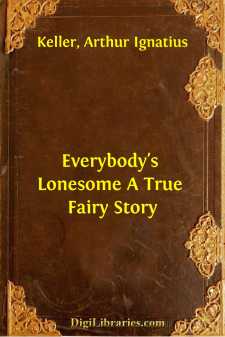 I DISAPPOINTED IN LIFE

Mary Alice came home quietly from the party. Most of the doors in the house were closed, because it was cold, and the halls were hard to heat. Mary Alice knew exactly what she should see and hear if she opened that door at her right as she entered the house, and went into the sitting-room. There was a soft-coal fire in the small, old-fashioned grate under the old, old-fashioned white marble mantel. Dozing—always dozing—on the hearth-rug, at a comfortable distance from the fire, was Herod, the big yellow cat. In the centre of the room, under the chandelier, was a table, with a cover of her mother's fancy working, and a drop-light with a green shade. By the unbecoming light of this, her mother was sewing. What day was this? Tuesday! She was mending stockings. Mary Alice could see it all. She had been seeing it for twenty years during which nothing—it seemed to her—had changed, except herself. If she went in there now, her mother would ask her the same questions she always asked: "Did you have a nice time?" "Who was there?" "Anybody have on anything new?" "What refreshments did they serve?"

Mary Alice was tired of it all—heartsick with weariness of it—and she stole softly past that closed sitting-room door and up, through the chilly halls where she could see her own breath, to her room.

She did not light the gas, but took off in the dark her "good" hat and her "best" gloves and her long black cloth coat of an ugly "store-bought" cut, which was her best and worst. Then, in an abandon of grief which bespoke real desperation in a careful girl like Mary Alice, she threw herself on her bed—without taking off her "good" dress—and buried her head in a pillow, and hated everything.

It is hard to be disappointed in love, but after all it is a rather splendid misery in which one may have a sense of kinship with earth's greatest and best; and it has its hopes, its consolations. There is often the hope that this love may return; and, though we never admit it, there is always—deep down—the consolation of believing that another and a better may come.

But to be disappointed in the love of life is not a splendid misery. And Mary Alice was disappointed in her love of life. To be twenty, and not to believe in the fairies of Romance; to be twenty and, instead of the rosy dreams you've had, to see life stretching on and on before you, an endless, uninspired humdrum like mother's, darning stockings by the sitting-room fire—that is bitterness indeed.

Hardship isn't anything—while you believe in life. Stiff toil and scant fare are nothing—while you expect to meet at any turning the Enchanter with your fortune in his hands. But to be twenty and not to believe——!

Mary Alice had never had much, except the wonderful heart of youth, to feed her faith with. She wasn't pretty and she wasn't clever and she had no accomplishments. Her people were "plain" and perpetually "pinched" in circumstance. And her life, in this small town where she lived, was very narrow....