Every Man for Himself 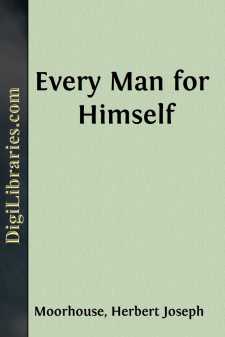 Except for the lone policeman who paused beneath the arc light at the Front Street intersection to make an entry in his patrol book, Bay Street was deserted. The fog which had come crawling in from the lake had filled the lower streets and was feeling its way steadily through the sleeping city, blurring the street lights. Its clammy touch darkened the stone facades of tall, silent buildings and left tiny wet beads on iron railing and grill work. Down towards the waterfront a yard-engine coughed and clanked about in the mist somewhere, noisily kicking together a string of box-cars, while at regular intervals the fog-horn over at the Eastern Gap bellowed mournfully into the night.

After tucking away his book and rebuttoning his tunic the policeman lingered on the corner for a moment in the manner of one who has nothing to do and no place to go. He was preparing to saunter on when footfalls began to echo in the emptiness of the street and presently the figure of a young man grew out of the gray vapor—a young man who was swinging down towards the docks with the easy stride of an athlete. As he came within the restricted range of the arc light it was to be seen that his panama hat was tilted to the back of his head and that he was holding a silk handkerchief to one eye as if a cinder had blown into it.

"Good-night, Officer," he nodded as he passed without halting his stride. "Some fog, eh?"

"'Mornin', sir," returned the dim sentinel of the Law with a respectful salute as he grinned recognition. "Faith, an' 't is, sir."

High up in the City Hall tower at the head of the street Big Ben boomed two ponderous notes which flung eerily across the city.

Already the young man had faded into the thickening fog. He was in no mood to talk to inquisitive policemen, no matter how friendly or lonesome. It was his own business entirely if concealed beneath the silk handkerchief was the most elaborate black eye which had come into his possession since Varsity won the rugby championship some months before. If his face ached and his knuckles smarted where the skin had been knocked off, that was his own business also. And when the judgment of calmer moments has convinced a respectable young gentleman of spirit that there is nobody but himself to blame for what has happened he is inclined to solitary communion while taking the measure of his self-dissatisfaction.

It was indeed the end of a very imperfect day for Mr. Philip Kendrick. As he descended the stairs to the Canoe Club his thoughts were troubled. At that hour there was nobody about, but he let himself in with a special key which he carried for such contingencies. He found the suitcase undisturbed where he had left it and soon had his canoe in the water. A moment later he was driving into the thick wall of fog with strong, practiced strokes, heading straight across the bay for Centre Island.

The fog gave him little concern. This land-locked Toronto Bay he knew like a well-marked passage in a favorite book and at two o'clock in the morning it was not necessary to nose along cautiously, listening for the approach of water craft....