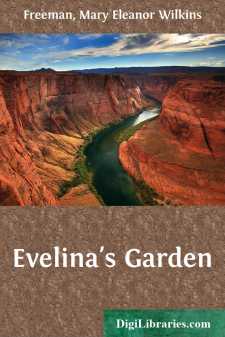 On the south a high arbor-vitæ hedge separated Evelina's garden from the road. The hedge was so high that when the school-children lagged by, and the secrets behind it fired them with more curiosity than those between their battered book covers, the tallest of them by stretching up on tiptoe could not peer over. And so they were driven to childish engineering feats, and would set to work and pick away sprigs of the arbor-vitæ with their little fingers, and make peep-holes—but small ones, that Evelina might not discern them. Then they would thrust their pink faces into the hedge, and the enduring fragrance of it would come to their nostrils like a gust of aromatic breath from the mouth of the northern woods, and peer into Evelina's garden as through the green tubes of vernal telescopes.

Then suddenly hollyhocks, blooming in rank and file, seemed to be marching upon them like platoons of soldiers, with detonations of color that dazzled their peeping eyes; and, indeed, the whole garden seemed charging with its mass of riotous bloom upon the hedge. They could scarcely take in details of marigold and phlox and pinks and London-pride and cock's-combs, and prince's-feather's waving overhead like standards.

Sometimes also there was the purple flutter of Evelina's gown; and Evelina's face, delicately faded, hung about with softly drooping gray curls, appeared suddenly among the flowers, like another flower uncannily instinct with nervous melancholy.

Then the children would fall back from their peep-holes, and huddle off together with scared giggles. They were afraid of Evelina. There was a shade of mystery about her which stimulated their childish fancies when they heard her discussed by their elders. They might easily have conceived her to be some baleful fairy intrenched in her green stronghold, withheld from leaving it by the fear of some dire penalty for magical sins. Summer and winter, spring and fall, Evelina Adams never was seen outside her own domain of old mansion-house and garden, and she had not set her slim lady feet in the public highway for nearly forty years, if the stories were true.

People differed as to the reason why. Some said she had had an unfortunate love affair, that her heart had been broken, and she had taken upon herself a vow of seclusion from the world, but nobody could point to the unworthy lover who had done her this harm. When Evelina was a girl, not one of the young men of the village had dared address her. She had been set apart by birth and training, and also by a certain exclusiveness of manner, if not of nature. Her father, old Squire Adams, had been the one man of wealth and college learning in the village. He had owned the one fine old mansion-house, with its white front propped on great Corinthian pillars, overlooking the village like a broad brow of superiority.

He had owned the only coach and four. His wife during her short life had gone dressed in rich brocades and satins that rustled loud in the ears of the village women, and her nodding plumes had dazzled the eyes under their modest hoods. Hardly a woman in the village but could tell—for it had been handed down like a folk-lore song from mother to daughter—just what Squire Adams's wife wore when she walked out first as bride to meeting. She had been clad all in blue.

“Squire Adams's wife, when she walked out bride, she wore a blue satin brocade gown, all wrought with blue flowers of a darker blue, cut low neck and short sleeves. She wore long blue silk mitts wrought with blue, blue satin shoes, and blue silk clocked stockings. And she wore a blue crape mantle that was brought from over seas, and a blue velvet hat, with a long blue ostrich feather curled over it—it was so long it reached her shoulder, and waved when she walked; and she carried a little blue crape fan with ivory sticks.” So the women and girls told each other when the Squire's bride had been dead nearly seventy years....