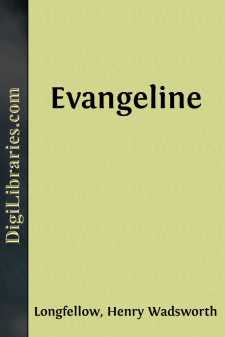 PART THE FIRST. I

IN the Acadian land, on the shores of the Basin of Minas,  Distant, secluded, still, the little village of Grand-Pré  Lay in the fruitful valley. Vast meadows stretched to the eastward,  Giving the village its name, and pasture to flocks without number.  Dikes, that the hands of the farmers had raised with labor incessant,  Shut out the turbulent tides; but at stated seasons the flood-gates  Opened, and welcomed the sea to wander at will o'er the meadows.  West and south there were fields of flax, and orchards and cornfields  Spreading afar and unfenced o'er the plain; and away to the northward  Blomidon rose, and the forests old, and aloft on the mountains  Sea-fogs pitched their tents, and mists from the mighty Atlantic  Looked on the happy valley, but ne'er from their station descended.  There, in the midst of its farms, reposed the Acadian village.  Strongly built were the houses, with frames of oak and of chestnut,  Such as the peasants of Normandy built in the reign of the Henries.  Thatched were the roofs, with dormer-windows; and gables projecting  Over the basement below protected and shaded the door-way.  There in the tranquil evenings of summer, when brightly the sunset  Lighted the village street, and gilded the vanes on the chimneys,  Matrons and maidens sat in snow-white caps and in kirtles  Scarlet and blue and green, with distaffs spinning the golden  Flax for the gossiping looms, whose noisy shuttles within doors  Mingled their sound with the whir of the wheels and the songs of the maidens.  Solemnly down the street came the parish priest, and the children  Paused in their play to kiss the hand he extended to bless them.  Reverend walked he among them; and up rose matrons and maidens,  Hailing his slow approach with words of affectionate welcome.  Then came the laborers home from the field, and serenely the sun sank  Down to his rest, and twilight prevailed. Anon from the belfry  Softly the Angelus sounded, and over the roofs of the village  Columns of pale blue smoke, like clouds of incense ascending,  Rose from a hundred hearths, the homes of peace and contentment.  Thus dwelt together in love these simple Acadian farmers,—  Dwelt in the love of God and of man. Alike were they free from  Fear, that reigns with the tyrant, and envy, the vice of republics.  Neither locks had they to their doors, nor bars to their windows;  But their dwellings were open as day and the hearts of the owners;  There the richest was poor, and the poorest lived in abundance.

Somewhat apart from the village, and nearer the Basin of Minas,  Benedict Bellefontaine, the wealthiest farmer of Grand-Pré,  Dwelt on his goodly acres; and with him, directing his household,  Gentle Evangeline lived, his child, and the pride of the village.  Stalworth and stately in form was the man of seventy winters;  Hearty and hale was he, an oak that is covered with snow-flakes;  White as the snow were his locks, and his cheeks as brown as the oak-leaves....