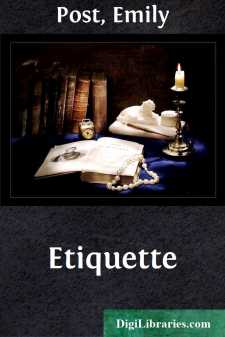 Many who scoff at a book of etiquette would be shocked to hear the least expression of levity touching the Ten Commandments. But the Commandments do not always prevent such virtuous scoffers from dealings with their neighbor of which no gentleman could be capable and retain his claim to the title. Though it may require ingenuity to reconcile their actions with the Decalogue—the ingenuity is always forthcoming. There is no intention in this remark to intimate that there is any higher rule of life than the Ten Commandments; only it is illuminating as showing the relationship between manners and morals, which is too often overlooked. The polished gentleman of sentimental fiction has so long served as the type of smooth and conscienceless depravity that urbanity of demeanor inspires distrust in ruder minds. On the other hand, the blunt, unpolished hero of melodrama and romantic fiction has lifted brusqueness and pushfulness to a pedestal not wholly merited. Consequently, the kinship between conduct that keeps us within the law and conduct that makes civilized life worthy to be called such, deserves to be noted with emphasis. The Chinese sage, Confucius, could not tolerate the suggestion that virtue is in itself enough without politeness, for he viewed them as inseparable and "saw courtesies as coming from the heart," maintaining that "when they are practised with all the heart, a moral elevation ensues."

People who ridicule etiquette as a mass of trivial and arbitrary conventions, "extremely troublesome to those who practise them and insupportable to everybody else," seem to forget the long, slow progress of social intercourse in the upward climb of man from the primeval state. Conventions were established from the first to regulate the rights of the individual and the tribe. They were and are the rules of the game of life and must be followed if we would "play the game." Ages before man felt the need of indigestion remedies, he ate his food solitary and furtive in some corner, hoping he would not be espied by any stronger and hungrier fellow. It was a long, long time before the habit of eating in common was acquired; and it is obvious that the practise could not have been taken up with safety until the individuals of the race knew enough about one another and about the food resources to be sure that there was food sufficient for all. When eating in common became the vogue, table manners made their appearance and they have been waging an uphill struggle ever since. The custom of raising the hat when meeting an acquaintance derives from the old rule that friendly knights in accosting each other should raise the visor for mutual recognition in amity. In the knightly years, it must be remembered, it was important to know whether one was meeting friend or foe. Meeting a foe meant fighting on the spot. Thus, it is evident that the conventions of courtesy not only tend to make the wheels of life run more smoothly, but also act as safeguards in human relationship....