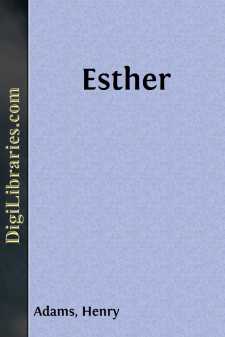 The new church of St. John's, on Fifth Avenue, was thronged the morning of the last Sunday of October, in the year 1880. Sitting in the gallery, beneath the unfinished frescoes, and looking down the nave, one caught an effect of autumn gardens, a suggestion of chrysanthemums and geraniums, or of October woods, dashed with scarlet oaks and yellow maples. As a display of austerity the show was a failure, but if cheerful content and innocent adornment please the Author of the lilies and roses, there was reason to hope that this first service at St. John's found favor in his sight, even though it showed no victory over the world or the flesh in this part of the United States. The sun came in through the figure of St. John in his crimson and green garments of glass, and scattered more color where colors already rivaled the flowers of a prize show; while huge prophets and evangelists in flowing robes looked down from the red walls on a display of human vanities that would have called out a vehement Lamentation of Jeremiah or Song of Solomon, had these poets been present in flesh as they were in figure.

Solomon was a brilliant but not an accurate observer; he looked at the world from the narrow stand-point of his own temple. Here in New York he could not have truthfully said that all was vanity, for even a more ill-natured satirist than he must have confessed that there was in this new temple to-day a perceptible interest in religion. One might almost have said that religion seemed to be a matter of concern. The audience wore a look of interest, and, even after their first gaze of admiration and whispered criticism at the splendors of their new church, when at length the clergyman entered to begin the service, a ripple of excitement swept across the field of bonnets until there was almost a murmur as of rustling cornfields within the many colored walls of St. John's.

In a remote pew, hidden under a gallery of the transept, two persons looked on with especial interest. The number of strangers who crowded in after them forced them to sit closely together, and their low whispers of comment were unheard by their neighbors. Before the service began they talked in a secular tone.

"Wharton's window is too high-toned," said the man.

"You all said it would be like Aladdin's," murmured the woman.

"Yes, but he throws away his jewels," rejoined the man. "See the big prophet over the arch; he looks as though he wanted to come down—and I think he ought."

"Did Michael Angelo ever take lessons of Mr. Wharton?" asked the woman seriously, looking up at the figures high above the pulpit.

"He was only a prophet," answered her companion, and, looking in another direction, next asked:

"Who is the angel of Paradise, in the dove-colored wings, sliding up the main aisle?"

"That! O, you know her! It is Miss Leonard. She is lovely, but she is only an angel of Paris."

"I never saw her before in my life," he replied; "but I know her bonnet was put on in the Lord's honor for the first time this morning."

"Women should take their bonnets off at the church door, as Mussulmen do their shoes," she answered....