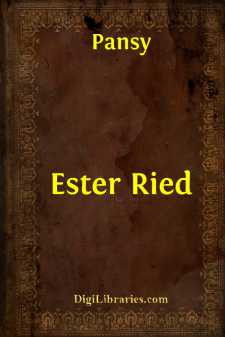 She did not look very much as if she were asleep, nor acted as though she expected to get a chance to be very soon. There was no end to the things which she had to do, for the kitchen was long and wide, and took many steps to set it in order, and it was drawing toward tea-time of a Tuesday evening, and there were fifteen boarders who were, most of them, punctual to a minute.

Sadie, the next oldest sister, was still at the academy, as also were Alfred and Julia, while little Minnie, the pet and darling, most certainly was not. She was around in the way, putting little fingers into every possible place where little fingers ought not to be. It was well for her that, no matter how warm, and vexed, and out of order Ester might be, she never reached the point in which her voice could take other than a loving tone in speaking to Minnie; for Minnie, besides being a precious little blessing in herself, was the child of Ester's oldest sister, whose home was far away in a Western graveyard, and the little girl had been with them since her early babyhood, three years before.

So Ester hurried to and from the pantry, with quick, nervous movements, as the sun went toward the west, saying to Maggie who was ironing with all possible speed:

"Maggie, do hurry, and get ready to help me, or I shall never have tea ready:" Saying it in a sharp fretful tone. Then: "No, no, Birdie, don't touch!" in quite a different tone to Minnie, who laid loving hands on a box of raisins.

"I am hurrying as fast as I can!" Maggie made answer. "But such an ironing as I have every week can't be finished in a minute."

Sadie Ried opened the door that led from the dining-room to the kitchen, and peeped in a thoughtless young head, covered with bright brown curls:

And she emerged fully into the great warm kitchen, looking like a bright flower picked from the garden, and put out of place. Her pink gingham dress, and white, ruffled apron—yes, and the very school books which she swung by their strap, waking a smothered sigh in Ester's heart.

"O, my patience!" was her greeting.

"Are you home? Then school is out".

"I guess it is," said Sadie. "We've been down to the river since school."

"Sadie, won't you come and cut the beef and cake, and make the tea? I did not know it was so late, and I'm nearly tired to death."

Sadie looked sober. "I would in a minute, Ester, only I've brought Florence Vane home with me, and I should not know what to do with her in the meantime. Besides, Mr. Hammond said he would show me about my algebra if I'd go out on the piazza this minute."

"Well, go then, and tell Mr. Hammond to wait for his tea until he gets it!" Ester answered, crossly.

"Here, Julia"—to the ten-year old newcomer—"Go away from thatraisin-box, this minute. Go up stairs out of my way, and Alfred too.Sadie, take Minnie with you; I can't have her here another instant.You can afford to do that much, perhaps."

"O, Ester, you're cross!" said Sadie, in a good-humored tone, coming forward after the little girl....