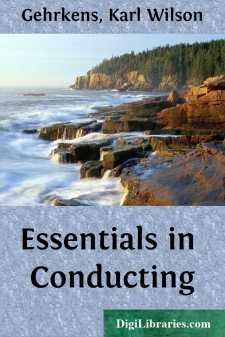 The word "conducting" as used in a musical sense now ordinarily refers to the activities of an orchestra or chorus leader who stands before a group of performers and gives his entire time and effort to directing their playing or singing, to the end that a musically effective ensemble performance may result.

This is accomplished by means of certain conventional movements of a slender stick called a baton (usually held in the right hand), as well as through such changes of facial expression, bodily posture, et cetera, as will convey to the singers or players the conductor's wishes concerning the rendition of the music.

Conducting in this sense involves the responsibility of having the music performed at the correct tempo, with appropriate dynamic effects, with precise attacks and releases, and in a fitting spirit. This in turn implies that many details have been worked out in rehearsal, these including such items as making certain that all performers sing or play the correct tones in the correct rhythm; insisting upon accurate pronunciation and skilful enunciation of the words in vocal music; indicating logical and musical phrasing; correcting mistakes in breathing or bowing; and, in general, stimulating orchestra or chorus to produce a tasteful rendition of the music as well as an absolutely perfect ensemble with all parts in correct proportion and perfect balance.

In order to have his directing at the public performance function properly, it thus becomes the conductor's task to plan and to administer the rehearsals in such a way that the performers may become thoroughly familiar with the music, both in technique and in spirit. In other words, the conductor must play the part of musical manager as well as that of artistic inspirer, and if he does not perform his task in such fashion as to be looked up to by the members of his chorus or orchestra as the real leader, and if he himself does not feel confident of being able to do his work better than any one else upon the ground, he cannot possibly be successful in any very high degree. A conductor must first of all be a strong leader, and failing in this, no amount of musical ability or anything else will enable him to conduct well. We shall have more to say upon this point in a .

SUMMARY OF THE HISTORY OF CONDUCTING

Conducting of one kind or another has undoubtedly been practised for many centuries, but directing by gestures of the hand has not been traced farther back than the fourteenth century, at which time Heinrich von Meissen, a Minnesinger, is represented in an old manuscript directing a group of musicians with stick in hand. In the fifteenth century the leader of the Sistine Choir at Rome directed the singers with a roll of paper (called a "sol-fa"), held in his hand. By the latter part of the seventeenth century it had become customary for the conductor to sit at the harpsichord or organ, filling in the harmonies from a "figured bass," and giving any needed signals with one hand or the head as best he could. Conducting during this period signified merely keeping the performers together; that is, the chief function of the conductor was that of "time beater." With the advent of the conductor in the rôle of interpreter, such directing became obsolete, and from the early nineteenth century, and particularly as the result of the impetus given the art by the conducting of Mendelssohn, Berlioz, Liszt, and Wagner, the conductor has become an exceedingly important functionary, in these modern days even ranking with the prima donna in operatic performances! It is now the conductor's aim not merely to see that a composition is played correctly and with good ensemble; more than that, the leader of today gives his own version or reading of the composition just as the pianist or violinist does. Instead of being a mere "time beater" he has become an interpreter, and (except in the case of the organist-director of a choir) he attempts to do nothing except so to manipulate his musical forces as to secure an effective performance.

THE PSYCHOLOGICAL BASIS OF CONDUCTING

The conductor works largely through the instrumentality of instinctive imitation; that is, his methods are founded upon the fact that human beings have an innate tendency to copy the actions of others, often without being conscious that they are doing so....