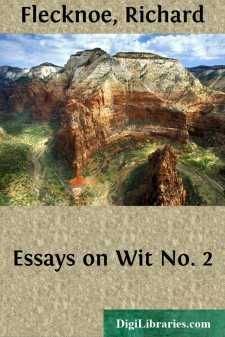 INTRODUCTION TO THE SERIES ON WIT

The age of Dryden and Pope was an age of wit, but there were few who could explain precisely what they meant by the term. A thing so multiform and. Protean escaped the bonds of logic and definition. In his sermon "Against Foolish Talking and Jesting" the learned Dr. Isaac Barrow attempted to describe some of the forms which it took; the forms were many, and it is difficult to discover any element which they held in common. Nevertheless Barrow ventured a summary:

It is, in short, a manner of speaking out of the simple and plain way, (such as Reason teacheth and proveth things by,) which by a pretty surprizing uncouthness in conceit of expression doth affect and amuse the fancy, stirring in it some wonder, and breeding some delight thereto.

And about sixty years later, despite the work of Hobbes and Locke in calling attention to the importance of semantics, the confusion still existed. According to John Oldmixon (Essay on Criticism, 1727, p. 21), "Wit and Humour, Wit and good Sense, Wit and Wisdom, Wit and Reason, Wit and Craft; nay, Wit and Philosophy, are with us almost the same Things." Some such confusion is apparent in the definition presented by the Essay on Wit (1748, p. 6).

In general it was recognized that there were two main kinds of wit. Both fancy and judgment, said Hobbes (Human Nature, X, sect. 4), are usually understood in the term wit; and wit seems to be "a tenuity and agility of spirits," opposed to the sluggishness of spirits assumed to be characteristic of dull people. Sometimes wit was used in this sense to translate the words ingenium or l'esprit. But Hobbes's disciple Walter Charleton objected to making it the equivalent of ingenium, which, he said, rather signified a man's natural inclination—that is, genius. Instead, he described wit as either the faculty of understanding, or an act or effect of that faculty; and understanding is made up of both judgment and Imagination. The Ample or Happy Wit exhibits a fine blend of the two (Brief Discourse concerning the Different Wits of Men, 1669, pp. 10, 17-19). In this sense wit combines quickness and solidity of mind.

In the other, and more restricted sense, wit was made identical with fancy (or imagination) and distinguished sharply from reason or judgment. So Hobbes, recording a popular meaning of wit, remarked (Leviathan. I, viii) that people who discover rarely observed similitudes in objects that otherwise are much unlike, are said to have a good wit. And judgment, directly opposed to it, was taken to be the faculty of discerning differences in objects that are superficially alike. (Between this idea of wit as discovering likeness in things unlike, and the Platonic idea of discovering the One in the Many, the Augustans made no connection.) A similar distinction between wit and judgment was made by Charleton, Robert Boyle, John Locke, and many others. The full implication lying in Hobbes's definition can be seen in Walter Charleton, who said (Brief Discourse, pp. 20-21) that imagination (or wit) is the faculty by which "we conceive some certain similitude in objects really unlike, and pleasantly confound them in discourse: Which by its unexpected Fineness and allusion, surprizing the Hearer, renders him less curious of the truth of what is said." In short, wit is delightful, but, because it leads away from truth, unprofitable and, it may be, even dangerous....