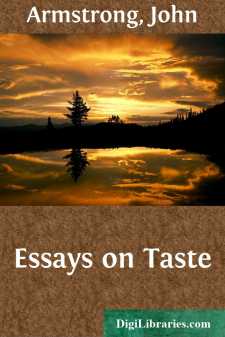 The essays on taste taken from the work of John Gilbert Cooper and John Armstrong and reprinted in this issue are of interest and value to the student of the eighteenth century because they typify the shifting attitudes toward taste held by most mid-century poets and critics. Cooper, who accepts the Shaftesbury-Hutchesonian thesis of the internal sense, emphasizes the personal, ecstatic effect of taste. Armstrong, while accepting the rationalist notions of clarity and simplicity, attacks methodized rules and urges reliance on individuality.

Following Shaftesbury and Hutcheson closely, Cooper treats taste as an immediate, prerational response of an internal sense to the proportion and harmony in nature, a response from an internal harmony of the senses, imagination, and understanding to a similar harmony in external nature. Cooper defines the effect of good taste as a "Glow of Pleasure which thrills thro' our whole Frame." This "Glow" is characterized by high emotional sensibility, and it thus minimizes the passivity which Hutcheson attributes to the internal sense.

Armstrong's sources are more eclectic than Cooper's. Armstrong shows similarities to Pope in his rationalism, to Dennis in his treatment of poetry as an expression of the passions, and to Hutcheson in his emphasis on benevolence and the psychological basis of perception. But to these views, he frequently adds personal eccentricities. For example, Taste: An Epistle to a Young Critic reveals its Popean descent in its tone and form; however, its gastronomic ending displays Armstrong's interest, as a physician, in the relation of diet to literary taste. If Armstrong's boast that "I'm a shrewd observer, and will guess What books you doat on from your fav'rite mess," is a personal eccentricity, his attack on false criticism and his exhortation to judge for oneself are typical harbingers of late eighteenth-century individualism and confidence in the "natural" man.

An honest farmer, or shepherd [writes Armstrong in "Of Taste"], who is acquainted with no language but what is spoken in his own county, may have a much truer relish of the English writers than the most dogmatical pedant that ever erected himself into a commentator, and from his Gothic chair, with an ill-bred arrogance, dictated false criticism to the gaping multitude.[1]

Cooper and Armstrong both hold a historically intermediate position in their attitudes toward taste, accepting early eighteenth-century assumptions and balancing them with late eighteenth-century emphases. Neither of them abandons the moral assumption of art which, as Armstrong explains it, is a belief in "a standard of right and wrong in the nature of things, of beauty and deformity, both in the natural and moral world."[2] Cooper, who defines taste as a thrilling response to art, falls back upon Hutcheson in minimizing the importance of art and making it secondary to moral knowledge. Armstrong, while describing taste as the sensitive discrimination of degrees of beauty and deformity, bases this discrimination not on artistic, but on moral qualities....