Essays on Life, Art and Science 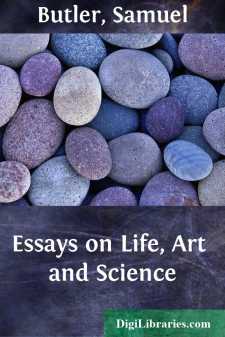 It is hardly necessary to apologise for the miscellaneous character of the following collection of essays.  Samuel Butler was a man of such unusual versatility, and his interests were so many and so various that his literary remains were bound to cover a wide field.  Nevertheless it will be found that several of the subjects to which he devoted much time and labour are not represented in these pages.  I have not thought it necessary to reprint any of the numerous pamphlets and articles which he wrote upon the Iliad and Odyssey, since these were all merged in “The Authoress of the Odyssey,” which gives his matured views upon everything relating to the Homeric poems.  For a similar reason I have not included an essay on the evidence for the Resurrection of Jesus Christ, which he printed in 1865 for private circulation, since he subsequently made extensive use of it in “The Fair Haven.”

Two of the essays in this collection were originally delivered as lectures; the remainder were published in The Universal Review during 1888, 1889, and 1890.

I should perhaps explain why two other essays of his, which also appeared in The Universal Review, have been omitted.

The first of these, entitled “L’Affaire Holbein-Rippel,” relates to a drawing of Holbein’s “Danse des Paysans,” in the Basle Museum, which is usually described as a copy, but which Butler believed to be the work of Holbein himself.  This essay requires to be illustrated in so elaborate a manner that it was impossible to include it in a book of this size.

The second essay, which is a sketch of the career of the sculptor Tabachetti, was published as the first section of an article entitled “A Sculptor and a Shrine,” of which the second section is here given under the title, “The Sanctuary of Montrigone.”  The section devoted to the sculptor represents all that Butler then knew about Tabachetti, but since it was written various documents have come to light, principally owing to the investigations of Cavaliere Francesco Negri, of Casale Monferrato, which negative some of Butler’s most cherished conclusions.  Had Butler lived he would either have rewritten his essay in accordance with Cavaliere Negri’s discoveries, of which he fully recognised the value, or incorporated them into the revised edition of “Ex Voto,” which he intended to publish.  As it stands, the essay requires so much revision that I have decided to omit it altogether, and to postpone giving English readers a full account of Tabachetti’s career until a second edition of “Ex Voto” is required.  Meanwhile I have given a brief summary of the main facts of Tabachetti’s life in a note (page 154) to the essay on “Art in the Valley of Saas.”  Any one who wishes for further details of the sculptor and his work will find them in Cavaliere Negri’s pamphlet, “Il Santuario di Crea” (Alessandria, 1902).

The three essays grouped together under the title of “The Deadlock in Darwinism” may be regarded as a postscript to Butler’s four books on evolution, viz., “Life and Habit,” “Evolution, Old and New,” “Unconscious Memory” and “Luck or Cunning.”  An occasion for the publication of these essays seemed to be afforded by the appearance in 1889 of Mr....