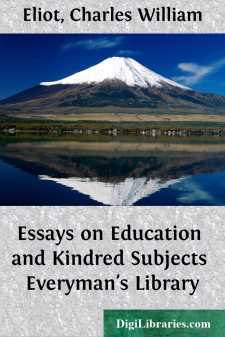 The four essays on education which Herbert Spencer published in a single volume in 1861 were all written and separately published between 1854 and 1859. Their tone was aggressive and their proposals revolutionary; although all the doctrines—with one important exception—had already been vigorously preached by earlier writers on education, as Spencer himself was at pains to point out. The doctrine which was comparatively new ran through all four essays; but was most amply stated in the essay first published in 1859 under the title "What Knowledge is of Most Worth?" In this essay Spencer divided the leading kinds of human activity into those which minister to self-preservation, those which secure the necessaries of life, those whose end is the care of offspring, those which make good citizens, and those which prepare adults to enjoy nature, literature, and the fine arts; and he then maintained that in each of these several classes, knowledge of science was worth more than any other knowledge. He argued that everywhere throughout creation faculties are developed through the performance of the appropriate functions; so that it would be contrary to the whole harmony of nature "if one kind of culture were needed for the gaining of information, and another kind were needed as a mental gymnastic." He then maintained that the sciences are superior in all respects to languages as educational material; they train the memory better, and a superior kind of memory; they cultivate the judgment, and they impart an admirable moral and religious discipline. He concluded that "for discipline, as well as for guidance, science is of chiefest value. In all its effects, learning the meaning of things is better than learning the meaning of words." He answered the question "what knowledge is of most worth?" with the one word—science.

This doctrine was extremely repulsive to the established profession of education in England, where Latin, Greek, and mathematics had been the staples of education for many generations, and were believed to afford the only suitable preparation for the learned professions, public life, and cultivated society. In proclaiming this doctrine with ample illustration, ingenious argument, and forcible reiteration, Spencer was a true educational pioneer, although some of his scientific contemporaries were really preaching similar doctrines, each in his own field.

The profession of teaching has long been characterised by certain habitual convictions, which Spencer undertook to shake rudely, and even to deride. The first of these convictions is that all education, physical, intellectual, and moral, must be authoritative, and need take no account of the natural wishes, tendencies, and motives of the ignorant and undeveloped child. The second dominating conviction is that to teach means to tell, or show, children what they ought to see, believe, and utter. Expositions by the teacher and books are therefore the true means of education. The third and supreme conviction is that the method of education which produced the teacher himself and the contemporary or earlier scholars, authors, and publicists, must be the righteous and sufficient method. Its fruits demonstrate its soundness, and make it sacred. Herbert Spencer, in the essays included in the present volume, assaulted all three of these firm convictions. Accordingly, the ideas on education which he put forth more than fifty years ago have penetrated educational practice very slowly—particularly in England; but they are now coming to prevail in most civilised countries, and they will prevail more and more. Through him, the thoughts on education of Comenius, Montaigne, Locke, Milton, Rousseau, Pestalozzi, and other noted writers on this neglected subject are at last winning their way into practice, with the modifications or adaptations which the immense gains of the human race in knowledge and power since the nineteenth century opened have shown to be wise.

For teachers and educational administrators it is interesting to observe the steps by which Spencer's doctrines—and especially his doctrine of the supreme value of science—have advanced towards acceptance in practice. In general, the advance has been brought about through the indirect effects of the enormous industrial, social, and political changes of the last fifty years. The first practical step was the introduction of laboratory teaching of one or more of the sciences into the secondary schools and colleges. Chemistry and physics were the commonest subjects selected. These two subjects had been taught from books even earlier; but memorising science out of books is far less useful as training than memorising grammars and vocabularies. The characteristic discipline of science can be imparted only through the laboratory method. The schoolmasters and college faculties who took this step by no means admitted Spencer's contention that science should be the universal staple at all stages of child development. On the contrary, they believed, as most people do to-day, that the mind of the young child cannot grasp the processes and generalisations of science, and that science is no more universally fitted to develop mental power than the classics or mathematics....